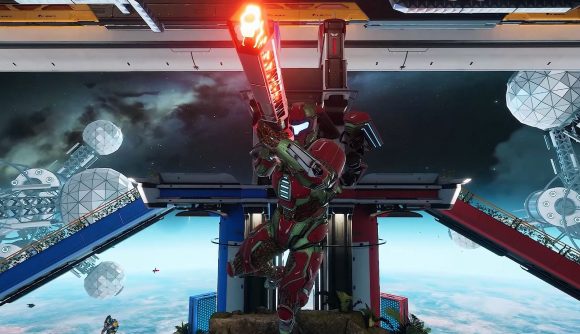 It’s a busy time for Splitgate fans. The Season 1 beta is upon us, and there are a slew of new features, modes, and juicy skins to unlock. That map creator looks good, doesn’t it?. The Loadout recently had a chance to sit down and talk with Splitgate CEO Ian Proulx about everything portal-mania, which includes whether we could indeed see a Splitgate Nintendo Switch release date in the future.

It’s no secret that 1047 Games is passionate about the future of Splitgate. The studio has been growing rapidly and hiring talent from major triple-A teams like Valorant, Halo, and Destiny, and Splitgate is shaping up to have a real rags-to-riches arc as the team sets its sights ever higher. But we had one pressing question for Proulx: is Splitgate going to appear on the Nintendo Switch?

“We love the Nintendo Switch,” Proulx tells The Loadout. “And we want to see Splitgate on every platform if and when that makes sense. Right now we are careful not to compromise our core vision and promise to our existing community to grow Splitgate into the best game it can be. But we need to balance the desire to grow our audience with doing right by our existing fans, so as we grow we’re eyeing those options but can’t promise anything just yet.”

There is no definitive answer, then, but it’s clear that Proulx is a fan of Nintendo’s Switch console — who isn’t? It is seemingly a matter of priorities for the team at 1047 Games. At the moment, the company is focusing on settling its new employees, and growing Splitgate in line with what the team envisions and what the fans want. From what we can gather, when we start to see significant progress towards the triple-A concept goals of the team, which Splitgate’s Beta Season 1 marks the beginning of, then consideration may be given to porting the game to the Nintendo Switch.

Splitgate is being developed alongside its community, so if you are particularly keen on seeing Splitgate on the Switch, then it couldn’t hurt to let the team know. In the meantime, you’ll have to grind those Splitgate ranks elsewhere.