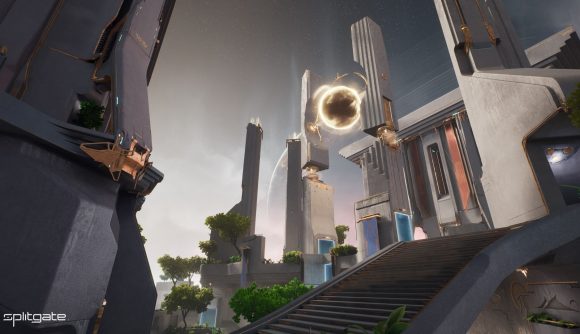 1047 Games’ arena shooter with portals might still technically be in beta, but that doesn’t stop the team from adding more and more features. At a recent press event, The Loadout was given a look inside what’s in store for Splitgate’s Beta Season 1, and one of these new additions is a custom map creator.

1047 Games CEO Ian Proulx is quick to establish that the map creator is “all about the community.” He wants players to get to grips with the feature as soon as possible and provide their feedback to the development team so that they can take action based on community feedback, instead of “blindly adding features the community may or may not want.”

Proulx is clear that the version of the map creator releasing in Splitgate’s Season 1 beta is “version one,” and that there are a lot of features the team wants to add in the future. “It’s ultimately going to come down to: what does the community want?”

The first thing to know about the Splitgate map creator is that you can have up to eight people in one session, all working together to create, edit, and play the map you’re working on at the same time, in real-time.

Another key takeaway is that the maps in map creator mode support bots. That means you can test out how your newest creation plays without having to harangue your friend group into testing out your latest meme-y monstrosity — that’s now the prerogative of the AI!

We also know that Beta Season 1 will allow custom maps made by you and your friends to be playable in custom games, and anybody in the world can play and save your map if they like it. That means that not only will you be able to create the map of your dreams, but those constructions also have the possibility to gain traction in the community and go viral.

In the map creator mode, you will be able to Instantly swap between creation and test mode on the fly. The idea is to keep things simple, so you can place a variety of shapes — like blocks or triangles — as well as things like objectives all at the touch of a button. Then, you can quickly hop in-game to make sure it all looks as good in first-person sweat-mode as it does in birds-eye contemplation mode.

One thing to note, however, is that Halo Infinite’s Forge mode is still not present in the 343 game, and likely won’t be released until around the time of Season 3. This leaves a huge window open for Splitgate to absolutely dominate by scratching the arena-shooter community’s itch for creating custom maps, and it begs the question: will the overlapping fanbase have had their fill by the time Halo Infinite’s Forge mode releases?