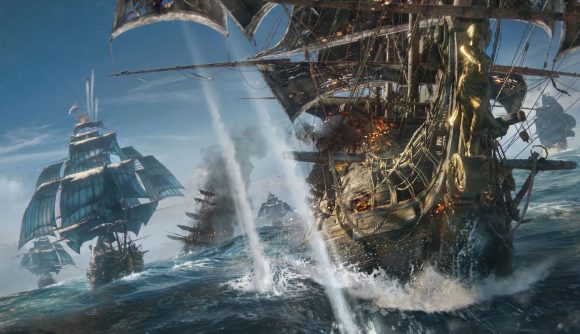 Believe it or not but it has been more than five years since Skull and Bones was revealed. Since then it has reportedly had a troubled development, with a reboot and multiple direction shifts according to a number of reports. But, now a Skull and Bones reveal could be on the horizon in early July.

In a new report from Tom Henderson for Try Hard Guides, he says that sources have said Ubisoft plans to lift the lid on the game the week beginning July 4, 2022. This reveal will reportedly cover the firm Skull and Bones release date (finally!) and unveil a new look at gameplay for the ship-combat, multiplayer game.

Ubisoft has confirmed that Skull and Bones is set to come out in the second half of this fiscal year so it could release this Holiday or in the first three months of 2023 before the fiscal year ends on March 31, 2023.

Ratings for the PvP game have appeared online in recent weeks suggesting it will release for PS5, Xbox Series X|S, PC, and even Google Stadia. This strongly suggests that the game is content complete and all that is left to do is polish the game and balance it.

All that is left to do now is sit back and watch the Skull and Bones ship approach the shore when Ubisoft fully unveils it soon.

We are kicking off our Insider Program, a unique opportunity for a selected few to test early versions of Skull and Bones & share feedback. Apply now if you think you have what it takes!

Earlier this year Ubisoft opened up beta testing for the game, which has reportedly dramatically changed its direction and gameplay over the years to build out a bigger experience. After a long wait, it looks like we won’t have to hold out for too long to see just how much the game has changed.