Dubbed ‘Rocket League on rollerblades’, Ubisoft’s Roller Champions is one of the most intriguing competitive titles to launch in 2021. Despite looking more like a party game on the surface, Roller Champions actually puts the competitive experience before anything else.

With a number of game modes taking place on a variety of vibrant, oval-shape roller rings, a dedicated ranked mode, and early support for community esports tournaments even in its beta stage, Ubisoft appears to be very keen to make this free-to-play game a top competitive title. It’s also going to be a crossplay game, so pals playing on a number of platforms can don their helmets and knee pads to compete with or against each other.

If you’ve seen word of Roller Champions floating around and it’s piqued your interest, then you’re in the right place. From its release date, to its ranked mode, we’re here to bring together everything we know about Roller Champions.

Between February 17 and March 1, Roller Champions is holding a large closed beta for European players. The beta will include a number of game modes, custom games, and a first look at the game’s ranked mode (more on that later). 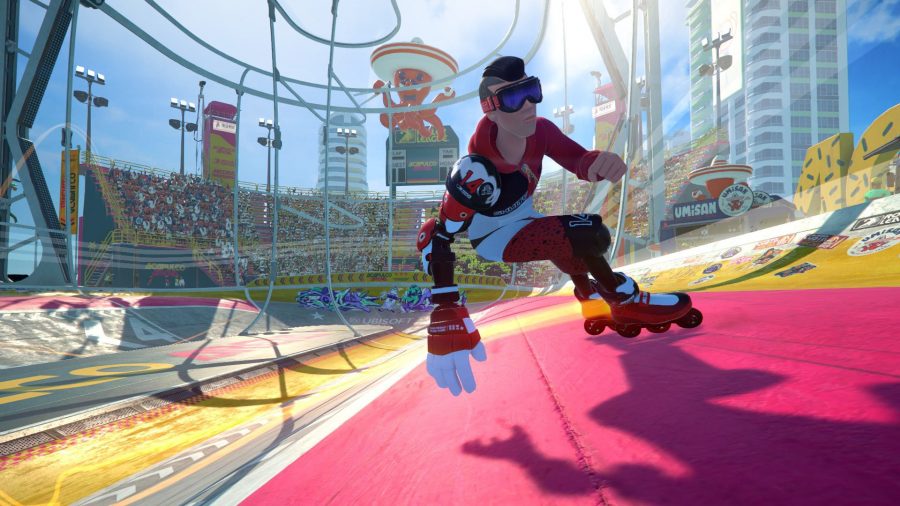 Ubisoft has shown off plenty of Roller Champions gameplay, and plenty of creators have also aired their experiences with the game’s betas on YouTube.

The gameplay is very fast-paced and, surprisingly, has quite a high skill ceiling for potential tactics and executing moves.

In standard modes, Roller Champions games are 3v3, but special modes such as 2v2 have been confirmed to appear for limited times.

Similarly to Rocket League, your trio must navigate your way round a pretty standard, oval roller derby ring, keeping possession of a ball. The more laps you complete with the ball in hand, the more points you can score when you finally throw the ball in the goal, which is mounted on the outside wall of the ring.

To dispossess the opposing team and win the ball off them, you can wipe out the ball carrier with a tackle, or try and intercept a pass.

In such a small arena, it can seem a bit chaotic, but once you get used to the flow of a Roller Champions game and master some of the movement mechanics, it promises to be a super competitive experience.

Roller Champions has a surprisingly sophisticated ranked mode, with 23 ranks propped up by proper MMR-based matchmaking. It closely resembles the work Ubisoft has done with the Rainbow Six Siege ranks.

In ranked mode, you can climb the ladder all the way from Garage rank to Champions rank. You can get the full lowdown in our guide to the Roller Champions ranks.

Roller Champions will launch with cross-platform play, allowing players on PC, PlayStation, and Xbox to play with each other. It will be free-to-play on all platforms too.

That’s all we know about Roller Champions so far, but we’ll continue to update this with new info – including that all important full release date.