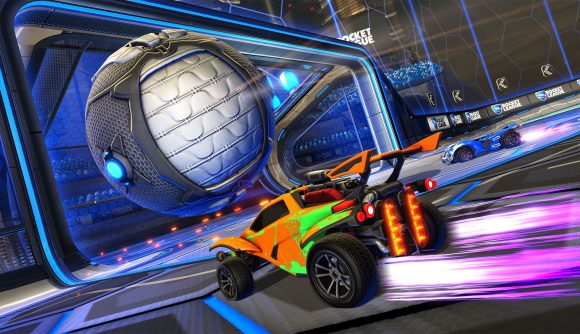 Rocket League’s Neon Fields map has caused problems for players since it was launched in January 2021. At first, the flashing lights and strobing effects caused some players to report having seizures just from playing in the rave-themed arena.

Developer Psyonix issued an update three weeks later, which added an “Effect Intensity” toggle, allowing players to remove the worst of the effects, including disabling the pulsing effects, flashing lights, reduces the brightness and intensity of background lights, and reducing or disabling the moving FX, lights, and background visuals.

However, players are still experiencing troubles with the strobing arena. Reddit user ‘Kiinqtonq’ says that they “suffer with bad eyesight,” and Neon Fields “causes major stress on [their] eyes.” What’s more, the player asks why “disliking” a map doesn’t remove it from your playlists. Other players replied to the initial post in agreement, reporting various instances where maps they disliked appear regularly in their games.

“Dislikes don’t seem to do anything,” explains Kiinqtonq in a subsequent comment, continuing to explain that “the amount of times I have to stop playing because this map gives me a headache is too much.”

I suffer with bad eyesight, this map causes major stress on my eyes. When will "disliking" a map ensure we NEVER have to play it? from RocketLeague

Other players say that on some ranked maps such as Farmstead, they struggle to see the ball when underneath it, or in some cases struggle to make out opposing cars against backgrounds. This naturally puts them at a disadvantage while climbing the Rocket League ranks, and they argue that a more effective dislike button would aid their grind. However, players’ health remains a more pressing issue, and Neon Fields can appear in competitive ranked matches.

The Loadout reached out to Psyonix for comment on both the continued issues with Neon Fields and the “dislike arena” button, but the developer is yet to respond.