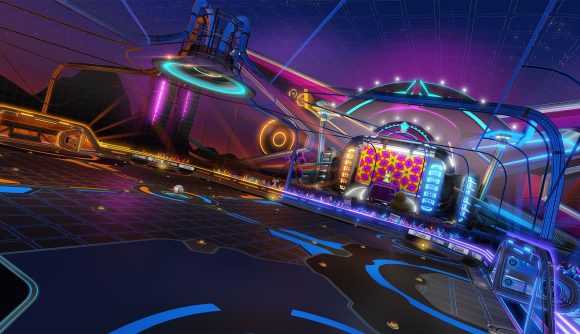 Psyonix has put out a statement regarding Rocket League’s Neon Fields arena, which we reported earlier this month gave players epileptic seizures and made others feel nauseous. Their post in the Rocket League subreddit gathered a lot of attention, including nearly 2,000 upvotes, as players tried to draw Psyonix’s attention to the problem.

Reddit user u/psyonixistrynakillme created an account to lodge the complaint after failing to reach Psyonix by other means, saying “I am epileptic and the new map is giving me seizures.” A Psyonix dev sent them a DM a couple of days later, but did not respond to The Loadout’s request for comment on the matter at the time.

They even offered their own suggestions at the time, due to the fact that disliking the arena didn’t remove it from their Rocket League playlist. Their suggestions were as follows: “I think the map should be removed or make some sort of setting to make the map different I guess lol. Or at the very least slap a big epilepsy warning when opening the game.”

However, Psyonix has now taken the advice on board and added the option to change the settings for Neon Fields to aid those with epilepsy and other disabilities.

The setting, known as ‘Effect Intensity’, will be able to be toggled between ‘Default’ and ‘Low’. The lower setting will make the following changes to Neon Fields:

Hopefully all players will be able to take to Neon Fields when the update goes live on February 1 at 16:00 PST (19:00 EST / 00:00, February 2 GMT). Soon, everyone will be able to hop in Rocket League’s best cars and drive their way to victory.