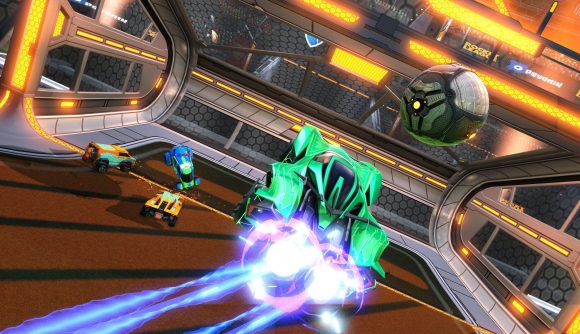 With Rocket League’s massive free-to-play update coming at some point in September, Psyonix has lifted the lid on some of the changes that will be happening to the game’s competitive mode.

For starters, Rocket Passes, competitive ranked seasons, and the all new tournaments that will arrive with the update are all going to be compressed into one simple season. This means all three will start and end on the same dates, making it easier for players to keep track of things and know how long they have left to grind or complete challenges. Once the update drops, Season 1 will begin and kickstart a new Rocket Pass, ranked season, and tournaments.

There are also some tweaks being made to the Rocket League ranks. Previously, players would battle their way to the top tier of the ranking system, Grand Champion. However, following the update, Grand Champion will be divided into three sub-tiers (similarly to the ranks that precede it) with a new top rank being introduced above it. While this is exciting enough for elite Rocket League players, the name of this new rank will definitely create some extra buzz: Supersonic Legend.

That’s right, the best of the best in ranked will now be dubbed Supersonic Legends. Marvellous.

There are also some changes down the bottom end of the rankings system in preparation for an influx of, essentially, noobs.

With free-to-play, there’ll be plenty of new players trying out Rocket League, and as a result, Season 1’s soft reset for ranks will place existing players slightly higher up the ranks than the newbies initially.

Psyonix has also increased the level at which ranked can be accessed. New players must reach level 10 before being able to hop into ranked matches.

In addition to Tournaments, Challenges, and Cross-Progression, there’s still a lot coming to Rocket League when free to play launches. Here’s everything else you can expect, like new Ranks, new Quick Chats, and more!
📖: https://t.co/YhTsNtIlbv pic.twitter.com/TGQ5RvUwhk

There are a number of other small tweaks being made to the game in general to prepare for the wave of new players, which can all be found in this update post.

With the grind to the top of the Rocket League ranks getting a little longer this year, it’s clear Psyonix’s priority is to really separate the good from the great. With changes catering for both existing and new players, it seems as if competitive Rocket League will be a good experience for everyone when it’s unleashed as a completely free game.