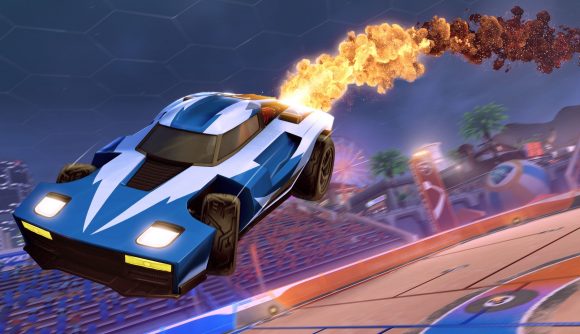 When Epic Games bought Psyonix in May 2019, there were rumblings of change in the Rocket League atmosphere. The publisher suggested the game would be removed from Steam in time, and it looks like that time is finally here. That’s because Rocket League is getting its biggest update yet and going free-to-play later this summer.

Psyonix made the announcement on the official Rocket League blog today, where it confirmed the game, which is currently celebrating five wonderful years, will be free for all and include cross-platform progression for item inventories, Rocket Pass progress, and Rocket League ranks, providing that players’ accounts are linked to an Epic Games account.

It also means that yes, Rocket League is finally moving over to the Epic Games Store on PC this summer. But don’t worry, if you already own it on Steam, you’ll still be able to play the game with full support for future updates. Newbies just won’t be able to download it on Valve’s platform anymore.

The news hasn’t exactly come as a shock – rumours of the game going free-to-play have been circulating for a while, but it does mean the game should get a healthy influx of players later this year.

Of course, it does also mean that current players will get some sweet cosmetics free of charge to celebrate their time scoring incredible aerial goals with friends. Anyone who has played Rocket League online prior to the free-to-play update will be rewarded with a legacy status, which includes all Rocket League DLC released before the update, an Est. 20XX title that displays the year when the player first started playing Rocket League, 200+ common items upgraded to legacy quality, a golden cosmos boost, Dieci-Oro wheels, and a huntress player banner.

A Faded Cosmos Boost will also be handed out when the game goes free-to-play.

More information will about the update will be released in the next few weeks, including information on how Psyonix plans to rework the tournament and challenge system reworks. Exciting.