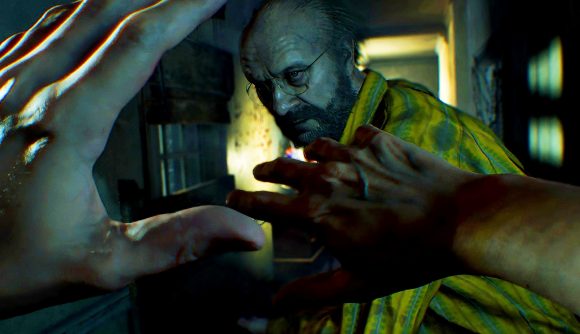 Why do we think the next-gen version of Resident Evil 7, Resident Evil 2, and Resident Evil 3 will release on PS5 and Xbox Series X soon? Well, because a perfect storm is brewing and it seems like perfect conditions for Capcom to release these games.

Firstly, as mentioned above, the three games have been spotted on the PSN database. This suggests that they’re all-but-ready to go – and this usually only happens in close proximity to release. Reddit user ‘VFB-Fan93’ shared them here, so you can check it all out for yourself if you don’t trust us.

Adding to the rumours, all three Resident Evil games are on sale right now – a PlayStation Store, Microsoft Store, and Steam sale that’s due to end on Monday. Commonly, games with next-gen updates coming go on sale just before the updates themselves are released. The next-gen update for all three Resident Evil games is going to be free for owners of the current-gen version, but you actually need to own the game to benefit from that – right?

PS5 versions of Resident Evil 2, 3 and 7 have been spotted on the PSN database from GamingLeaksAndRumours

Further fanning the flames, Capcom has announced it is hosting a Capcom Showcase on June 13, 2022, at 15:00 PST. The fact that this presentation will coincide with the end of these Resident Evil games being on sale has led many fans to believe that we will see the next-gen updates for all three games made available on June 13, following an announcement during the Capcom Showcase.

Take this with a grain of salt, as Capcom hasn’t confirmed anything, but… Who knows, you may be playing Resident Evil on your PS5 sooner than you think.

If you’re looking forward to all the other announcements coming from game developers this month, you should check out our Summer Game Fest 2022 schedule right here – that way, you can keep track of everything going on in June and beyond. Oh, and the Resident Evil 4 remake has been announced – and it’s not too far away.