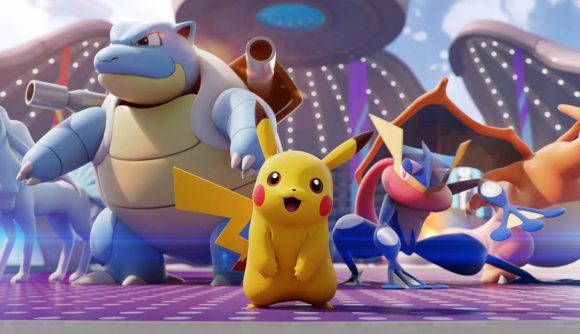 What happens when you mash League of Legends and Pokémon together? Pokémon Unite, of course. This free-to-play MOBA took the world by storm when it was released last summer, and to celebrate the game’s success, 2022 will see the first ever Pokémon Unite World Championships.

Worlds is the end goal here, of course, and while only the best of the best will book their slot for the tournament in London, which is due to take place at some time in August, teams of all abilities are encouraged to enter the upcoming monthly tournaments.

These monthly tournaments will take place over the course of February through to June. There’s no entry cost, and teams of five in the seven regional zones – that’s North America, South America, Europe, Oceania, Japan, South Korea, and Asia-Pacific – will be able to take part using the game’s tournament mode, regardless of what platform they play on.

In April, players will also be able to take part in the Aeos Cup, a one-off tournament that awards prizes and more Championship Points than the monthly ones. The top four teams from each Regional Zone’s March finals and the 12 finalists from the Aeos Cup will then fight it out in a double-elimination event.

Once the qualifying tournaments have ended, the top eight teams with the most Championship Points will cement their place in the Regional Championship. They’ll be joined by the top four teams from the previous month’s tournament and the 12 teams that earn a spot through the Open Qualifier. It’s here that teams will determine their Worlds fate – so expect things to get a bit spicy, especially with double elimination finals.

When all is said and done, invitations will be sent out to the top teams for the 2022 World Championships. North America, Europe, Japan, Asia-Pacific, and South Korea will get two invites each, while South America and Oceania will only get one each.

Attention Trainers! The time for #PokemonUNITE to join the 2022 Pokémon World Championships has come!

Read more about the details, including how to join in the competition, right here ➡️ https://t.co/TZcQq867BI pic.twitter.com/14VCgrgqw0

While news of a proper Pokémon Unite competitive circuit is exciting, that’s not even the best bit – the prize pool is. Over the course of the Championship, more than $1 million will be dished out. The team that dominates the game at Worlds in August will walk away with $100,000, but teams who top their Regional Championships will also be given $20,000.

Sure, it’s not the biggest prize pool in esports – and it certainly pales in comparison to League of Legends Worlds and The International – but for a relatively new MOBA, it’s not bad.

Registration is open right now, so assemble your best trainers – you’re going to need it.