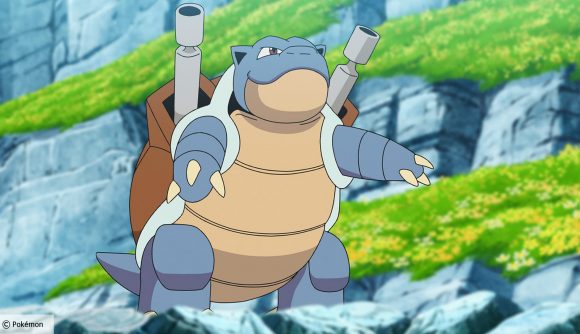 Blastoise stans, this is not a drill – TiMi Studio has announced that the big blue shelly boi is finally coming to Pokémon Unite. On September 1, the Generation One starter will be rapidly spinning his way into the MOBA game, having been teased since way back in June.

We can assume from the gameplay footage included in the announcement tweet that, alongside what looks like Rapid Spin, Blastoise will also ship with Hydro Pump and Surf. Blastoise’s Unite move, Hydro Typhoon, sees the Pokémon spin 720-degrees while stationary, blasting water at all in its radius.

Blastoise’s role has yet to be confirmed. With Venusaur serving as an Attacker, and Charizard as an All-Rounder, it would make most sense that the final member of the Gen One trio would be a Defender. This is also alluded to in that original teaser, which shows Blastoise on a green background.

You can check out the full release trailer for Blastoise below.

Though we don’t know everything that Blastoise will be packing just yet, we can easily see him debuting at a respectable spot in our Pokémon Unite tier list.

With Pokémon like Crustle and Snorlax currently considered S-Tier picks, however, it’ll take something special for Blastoise to dethrone them from their status as Pokémon Unite’s best Defenders – if that is his confirmed role, of course.