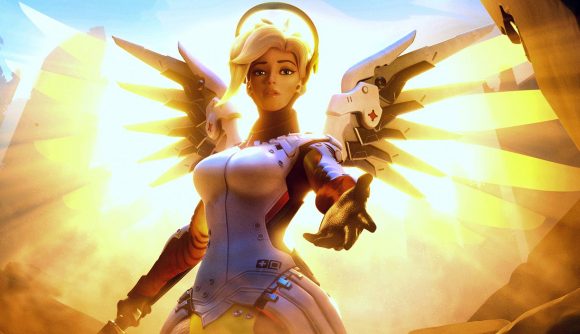 We know Mercy mains have had something of a tough time of it when it comes to the changes made to the Support in the more recent Overwatch 2 beta patch notes, but if there’s one thing they can count on, it’s this: Blizzard is always going to give Mercy some of the best skins in Overwatch. OWL’s Midseason Madness, a tournament to cap off the thrilling first half of 2022’s Overwatch League season, has started and leaks confirm that players can look forward to another slick Mercy skin very soon.

Reliable Overwatch leaker ‘Naeri‘ has taken to social media to share a first look at Royal Knight Mercy – a legendary skin that players will be able to pick up for 200 League Tokens soon – and it looks like one of her best skins to date.

Donning a fantastical medieval helmet sporting red plumage, Knight Mercy has the good Doctor Ziegler ditch her lab coat for bronze-tripped plate armour and chainmail. While the leak itself doesn’t offer us a full look at the skin, we wouldn’t be surprised if we learnt that Mercy’s staff was transformed into a jousting pole with this skin.

Do you want to check out this Overwatch leak for yourself? Well, knock yourself out. Here’s the tweet offering up our first look at Royal Knight Mercy:

The #OWL2022 New Mercy skin will be available soon for 200 League Tokens. Please see below on how to get League Tokens for free.

Due to the image’s dimensions, it might be worth clicking through onto the tweet for a better look. It has since been confirmed that this Royal Knight Mercy skin will be available for a limited time – from July 18 to Jul 23 – thanks to a YouTube advertisement spotted online.

As the tweet above says, players can also tune into official YouTube broadcasts and rebroadcasts of the tournament to earn League Tokens – or they can purchase them in-game.

You can find out more about the Midseason Madness tournament on the tournament page here. If you’re looking forward to the sequel, you can check out the latest on the new Overwatch 2 heroes here and the Overwatch 2 release date right here.