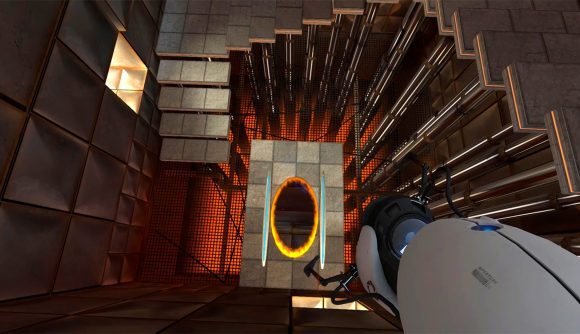 Earlier this year, it was revealed that Portal would be dropping on Nintendo Switch by way of the Portal Companion Collection – a bundle of the first and second game. We knew it would be launching at some point this year, but no concrete release date was ever given. Well the June 28 Nintendo Direct finally gave us the answer: it’s, erm, June 28.

Yep, Valve’s first major release on the Switch is happening just a few hours after the Nintendo Direct wraps up. Who doesn’t love a good shadow drop, eh? There’s a strong chance that by the time you’ve found and read this article, the Portal Companion Collection will be on Switch already. Here’s the store link, which will also reveal the happy revelation that the this Portal 1 and 2 bundle has a rather reasonable price point.

As well as all the single player portal-poppin’ puzzles, Portal 2 will have its split-screen and online multiplayer co-op functionality as well, providing you’ve got a Nintendo Online subscription.

To have not one but two Valve classics on the Switch as part of the Companion Collection is definitely a plus for Nintendo fans – then again, they are hardly limited on their choice of platformers and puzzlers.

The Nintendo Direct also gave us a look at some new Mario + Rabbids Sparks of Hope gameplay, and we finally got confirmation that Persona 3, 4, and 5 are getting Switch releases too.