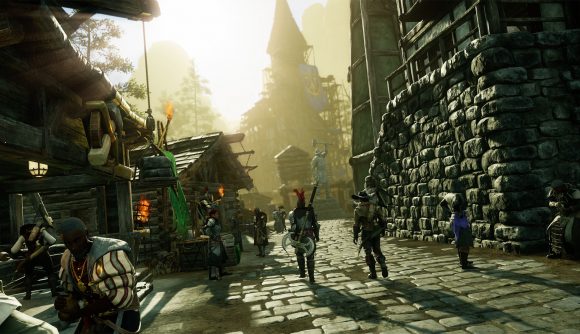 In classic MMORPG games like World of Warcraft Classic, trying to get hold of a tank or healer to clear certain instances can be a nightmare, especially while levelling. Traditionally, from the combat ‘holy trinity’, playing a DPS-focused spec makes for an easier levelling experience, as players can simply cleave through enemies without much fanfare.

As time’s gone by, MMO developers have either attempted to make levelling as a tank or healer more attractive, or removed barriers to ‘respec’ing’ into a more desirable role where possible. In Final Fantasy XIV, for example, it’s possible to master each of the game’s numerous jobs, allowing players to quickly switch between the three roles by simply switching around their equipment.

Although Amazon Game Studios’ upcoming MMO, New World, doesn’t quite bolster the sheer number of job options Square Enix’s offering does, its developers are taking a slightly approach to ensuring that, when the time comes to clear instanced content, players won’t be waiting around to fill their party.

“First and foremost, it is on us to make the Tank and Healer builds fun even as a solo player,” combat lead Dave Hall tells The Loadout, “which will drive the numbers up.” With New World attempting to provide dynamic gameplay with weapon-switching, alongside a level of flexibility in what roles are expected to do while in an instance, the developers are clearly up for the challenge.

Learn more about the latest features to be added to ⛰️ New World's Expeditions.

“Second,” Hall says, “our classless combat system helps here also. Players can quickly respec and change their equipment to fill any needed roles. For instance a DPS player could quickly change to tank by changing to heavy armor, adding a taunt gem to their weapon, and respec’ing into more constitution.”

While a full respec is necessary for Aeternum’s end-game content due to the difficulty of it, Hall says that players clearing early-mid-game instances can fill roles by simply changing their gear and gems alone. However, players are actively encouraged to respec and experiment during New World’s early stages, with respec’ing being available for free up until level 20.

Beyond that point, switching between roles will slowly start to increase in cost based on the player’s level – a measure that Hall believes will stop players from spending more time respec’ing than clearing the actual content. “We don’t want players constantly respec’ing and changing attributes for every encounter because that doesn’t seem fun,” he says, “so at end-game it’s not a trivial expense.”

Hall, however, also reiterates that experimentation remains a core part of New World’s combat, so a balance has to be struck. “We want players to be able to adapt to meta shifts, try different roles, and be able to experiment, so it’s not prohibitively expensive,” he says. “It won’t be an expense that you have to budget or plan on, but it is also something you won’t want to do frivolously.”

In trying to implement a ‘classless’ combat system with the desire to make clearing content in any role appetising, New World’s developers have had quite the task on their hands. As the MMO enters closed beta ahead of the full New World release date later this week, players will be eager to try and experience everything the game’s combat system has to offer.

Should you want to get involved with said beta, you can try your hand by signing up to become a tester here. Alternatively, those who preorder New World here will automatically be granted access.