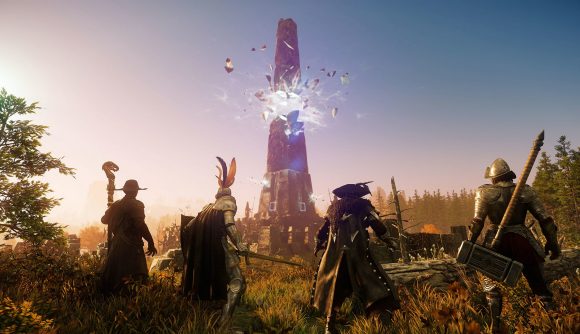 One of the most important components of any MMORPG game is its combat. Games like Final Fantasy XIV and World of Warcraft require players to load up action bars with a whole host of abilities to maximise rotations, but Amazon hasn’t taken a leaf out of their book for New World this time around.

With only three abilities available to use per weapon at any one time, some have been quick to criticise the game’s lack of creative options when it comes to combat. However, combat lead Dave Hall tells The Loadout that there’s more to New World’s implementation than meets the eye.

According to Hall, New World already has to factor in the complexity of weaving in hits between blocking and dodging attacks. “We tested this and found that three active abilities felt the best against our goals for time to kill,” he says.

Furthermore, New World also boasts in-combat weapon switching. With each of the game’s weapons possessing its own unique ability tree – providing extra skills to add to your rotation – regularly swapping between equipment throughout a fight provides extra offensive options. That is, once the extra weapon slot has been unlocked.

me waiting for closed beta pic.twitter.com/vMt810Zg2n

An additional development since New World’s earliest days, Hall notes, is the gradual defining of the game’s combat roles into something more akin to the combat ‘holy trinity’ of DPS, tank, and healer – especially when it comes to instanced PvE. However, that’s not to say, for example, a tank will be stuck purely on taunting duty during a pull.

“We want our tanks to be very active in combat and rotate between blocking, attacking, and taunting,” Hall says. “We recently updated our stamina regeneration to occur while you are attacking, so tanks will now need to decide when to try to regain stamina during combat and when to block/taunt.” With being block-broken also now being even more detrimental to tanks after the updates, effective stamina management is key, adding a further layer of complexity to New World’s combat – at least for its tanks.

New World’s development has been fraught with challenges, with its development team pretty much reworking the entire game from the ground up over the past year with player feedback in mind. As it finally enters into the closed beta stage of testing, it seems that Amazon Game Studios now has a real confidence in its combat ahead of the full New World release date.

If you want to get involved with New World’s closed beta, you can either sign up for a chance to become a tester here, or guarantee your spot by pre-ordering the game here.