Naraka: Bladepoint has been taking Steam by storm in recent months, with its free-to-play open betas and demos drawing in impressive player counts. The battle royale, developed by new Chinese studio 24 Entertainment, isn’t even out yet and already has ambitious plans to develop an esports scene with the help of publisher NetEase.

For PC players, the Naraka: Bladepoint release date isn’t too far away, with the hero-based BR dropping in August. But 24 Entertainment has, throughout the game’s development, made promises of bringing the game to consoles.

Speaking to The Loadout, 24’s overseas marketing manager, Raylan Kwan, says that while the PC launch is taking priority, the studio hopes to get Naraka: Bladepoint onto consoles before the year is out. While many games will launch on all platforms on day one, Kwan also explains that the process in getting the game on consoles will take longer due to both the studio’s small team and the fact that titles developed in China rarely get console ports.

“We’re working with Sony already and hopefully we will get the console version out by the end of this year, if everything goes well,” Kwan says. “We can’t promise it, because there aren’t many Chinese studios developing console versions of games, and the development team is fully focused on the PC launch right now.

“We’re also talking with Xbox but right now we don’t have a big enough dev team to do all the porting altogether. But I think the situation will get much better after the PC launch.”

With the battle royale genre becoming increasingly popular on mobile devices, and with Naraka: Bladepoint’s UI looking somewhat mobile-friendly, we also asked Kwan if a mobile version could be on the horizon.

“Eventually, we might get there,” Kwan says. “But for now we need to not get too ahead of ourselves and take things step by step. Right now our PC version is not even released yet, so we’re not thinking about a mobile version right now.”

Final Beta has come to an end.
Thanks to every 1/184761 for your continuous support for #NARAKABLADEPOINT. It is your feedback and suggestions that will help us make NARAKA even better.

SEE YOU on Aug 12th. pic.twitter.com/srIJeMfLEH

Naraka: Bladepoint’s successful play tests, betas, and demos have seen the game fly up charts when it comes to Steam player counts, with this month’s demo period seeing a peak of around 184,000 players. However, while these were free to jump into, the full game won’t be at launch, with a price tag of $19.99/ £17.99.

Kwan says that he understands people’s reluctance to pay for battle royale games like Naraka when free alternatives like Call of Duty: Warzone and Fortnite are out there, but he is confident that the interest the game has built up won’t fall away because of a price tag. 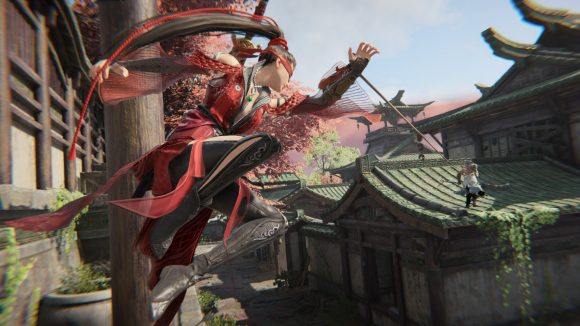 “I think it’s understandable that some players have concerns about what the game will be on launch, and are a bit hesitant to pay the price. But I think $20 for most regions, and less in some regions, is not very expensive – but also it’s not free-to-play so I understand that some players won’t be willing to play.

“But I think when we launch, [people will see] that Naraka: Bladepoint is worth that $20, and even more. I think we will get there to convince players, based on the performance of the game.”

As quite a unique entry into the battle royale genre and ambitions to try and establish a healthy competitive scene, there is a lot of optimism around Naraka: Bladepoint. While console players have a fair while to wait, it will be interesting to see if it can make a dent in a heavily-packed genre.