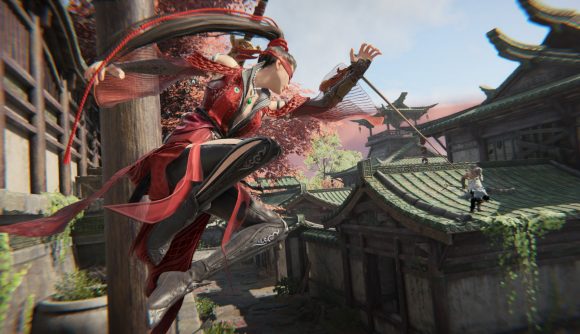 Naraka: Bladepoint was one of the most intriguing competitive titles to be showcased at this year’s E3, but for the thousands of people who played its first beta in April, that was old news. However, for some, it was the first time they had seen or heard about this melee combat-focused, hero-based battle royale, developed by new studio 24 Entertainment, and it seems to have piqued some more interest. Current estimates suggest that the second public beta has a peak player count of 186,000.

With all of that interest comes talk of what Naraka: Bladepoint will be like at the highest level, and whether it can foster a competitive scene similar to those its battle royale rivals have.

According to 24 Entertainment’s overseas marketing manager, Raylan Kwan, creating a thriving esports scene for Naraka: Bladepoint is certainly on the to-do list of the studio, which is apparently consulting with the game’s publisher NetEase.

“24 Entertainment is a new studio, but NetEase has tonnes of experience hosting esports events in China and Asia,” Kwan tells The Loadout. “So we have been talking and learning from them about how to hold an esports event or tournaments.”

While China will be the obvious place to start for Naraka: Bladepoint esports, there are ambitions to hold tournaments around the world.

“We do have plans for an esports event after launch,” Kwan says, “but we think that the tournament will start in China as that’s where we all have the most experience. However, global esport events are definitely on our schedule.”

While Naraka: Bladepoint will face tough competition from rival battle royales like Apex Legends, PUBG, and several massively popular mobile BR titles too in the competitive tournament space, it is certainly showing plenty of potential with how many are picking it up in its beta stage.

When the Naraka: Bladepoint release date rolls around in August, however, it will be interesting to see if these impressive player counts continue. While the betas have been free-to-play, the full game will not be, costing $19.99.

An extended feature on Naraka: Bladepoint with more insight from Kwan will go live later this week on The Loadout.