Wave 2 is coming! Nintendo made a promise in 2022 that 48 remastered courses would be coming to its incredibly popular Mario Kart 8 Deluxe title in six, unique waves. A hugely welcome piece of news for a game that’s still majestically thriving despite its 2017 release. And, with over 53 million copies sold worldwide, it’s hardly surprising it’s known as one of the best Nintendo Switch games of all time.

Wave 1 dropped on March 18, 2022, bringing eight classic tracks to the game from previous titles. This included Choco Mountain from Mario Kart 64 and Shroom Ridge from Mario Kart DS, and a lot of tracks from mobile-only, Mario Kart Tour. We’ve put together a full list of the wave 1 playable tracks below, if you’re looking to delve in.

And now, it’s time for wave 2, but when? Here’s everything you need to know about the Mario Kart 8 Deluxe DLC wave 2 release date from the full track listing to how you’ll be able to play them.

There’s four more waves still to come and if we were to do our own speculation based on the release dates spanning March 2022 and continuing until the end of 2023 – then that’s 21 months.

With wave 1 in March and wave 2 in August, perhaps players can expect another around November/December and then repeat that pattern for the last three through 2023. 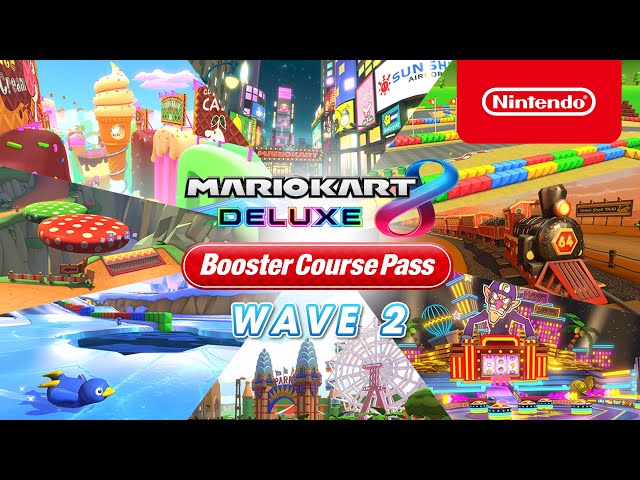 In case you haven’t downloaded them already, there’s a whole wave 1 drop that brought eight additional tracks to Mario Kart 8 Deluxe for both the Golden Dash Cup and Lucky Cat Cup. Here’s what they are:

We also know that wave 3 will create the Rock Cup and Moon Cup, wave 4 will be the Fruit Cup and Boomerang Cup, wave 5 will be the Feather Cup and Cherry Cup, and last but not least, wave 6 will be the Acorn Cup and Spiny Cup.

How to play the new Mario Kart 8 Deluxe tracks

There are two ways to play the new courses on Mario Kart 8 Deluxe.

Players can either purchase the Booster Course Pass (£22.49/$24.99) to immediately gain access to the new courses and all the future waves (when they turn up). This pass was specifically released alongside wave one to support all new tracks coming into the game.

The second option is for anyone with a Nintendo Switch Online + Expansion Pack membership (£34.99/$49.99 for 12 months). With the membership, alongside other perks, players can access the new Mario Kart 8 Deluxe tracks at no additional cost, meaning they don’t have to buy the Booster Course Pass. Of course, you’ll also need the main game on the Nintendo Switch.

That’s everything we know so far about the Mario Kart 8 Deluxe DLC release. We’ll be sure to keep this guide updated as and when we hear more, so check back periodically.