The League of Legends 10th anniversary celebrations signalled a special day for Raymond ‘KaSing’ Tsang. From the amateur circuit, to the Challenger Series, the LCS, and the World Championships, this British professional player has done it all. It’s been nearly ten years since he first booted up the game, so we sat down with the support player at the League10 event to take a stroll down memory lane.

“It’s funny, when I first played League, I really thought it was a s*** game,” KaSing tells us at the event. “I thought that the graphics were so bad that the game was just meant for kids. A couple of years later and I’m bunking college to play it… that’s not something I expected to happen.”

The choice to stick with League of Legends was a wise one for KaSing, who now competes with Excel Esports in the LEC. He’s played the game enough to be part of the top 500 in Europe, one of the reasons why he was invited to the League10 event alongside Stephen ‘Snoopeh’ Ellis, Paul ‘sOAZ’ Boyer, Mike ‘Wickd’ Peterson, and a number of other pros, and League of Legends-based content creators.

“League appealed to me and my friends because it was a bit easier for me and my friends to pick up than DOTA,” he says. “I used to play DOTA, and there was a hero called Invoker who had a spell called Sunstrike. It was a global, and if you were a really insane player, you could predict where the enemy could be. I honestly though Veigar’s W worked like that, and when I found out it didn’t, I quit the game for a week because I was so annoyed.

“Then I played it again, and I found Anivia. From that point, I never really stopped.”

A couple of years later and I’m bunking college to play it...

Like many, League of Legends appealed to the average support player because of its easier mechanics and brighter aesthetic. Only DOTA and Heroes of Newerth offered the unique MOBA experience back then. Little did they know that Riot Games was about to shake up the genre.

“I think the reason I’m able to keep playing this game is because Riot is so good at keeping it interesting,” KaSing says. “The fact that Riot keeps changing the game means that you have to keep learning, adapting, and improving if you want to compete at the highest level.”

The esports scene surrounding the game provides a quiet backdrop to the League10 event. The World Championships are underway in Berlin, an event which will always hold a special place in his heart. 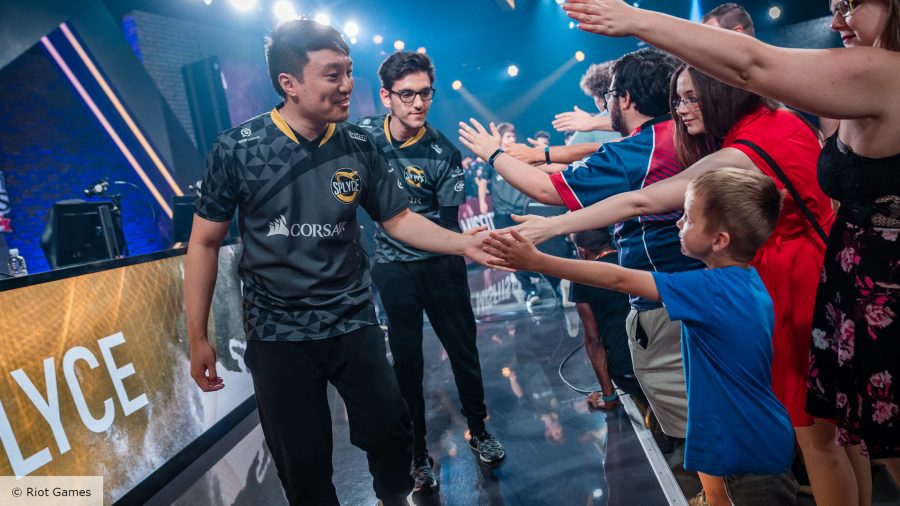 “I remember being in the LCS waiting room watching Fnatic vs Origen. It was game five, and if Fnatic won, it meant that my team would go to Worlds,” he says. “It was such a relief when Fnatic closed the game out. I just looked at Pr0lly, our coach, and thought ‘holy s***, we made it.’ It was the first year that I’d set an actual goal as a player and we actually did it. I spent so much time trying to improve myself and it all paid off.”

Related: Work your way to the top 500 with our LoL Ranks guide

The British player has come a long way since making his debut in 2014 as a substitute for Supa Hot Crew in the LCS. Prior to that, KaSing had been competing in amateur teams while completing his college education.

“Obviously, a lot of my favourite moments in League of Legends have come from being in the professional scene,” KaSing, who has around three-and-a-half years of in-game play time, says. “The first time I played at Wembley is something I will never forget. I was subbing for Supa Hot Crew at the time, and it was the first time I played at a ‘big’ event.

“I played Nami in my first game, and I was really nervous to be honest. I was shaking on stage, and when the audience cheered, the stage would literally shake.”

“I was quite surprised that I was one of the top 500 players in Europe. It’s an achievement for me, definitely,” he says. “It’s a great event. It fits in with the theme of, you know, ‘we are gamers’ I guess. There are players here that I’ve seen since Season 2. It’s very much a blast from the past, and it’s a really nice feeling to see everyone together again like this – it’s like a school reunion!”

Over the new year, KaSing will spend his time preparing for a new competitive season, honing his skills as the pre-season update changes the meta. He’ll be practicing new champions, learning new strategies, and studying his future opponents.

But for now, the celebrations of Riot’s new games continue. KaSing might well be a world-class player competing at the highest level, but at this event, he’s just another gamer.

Josh is a veteran of the esports scene, having worked in the industry for over eight years. He likes League of Legends and other big esports titles.