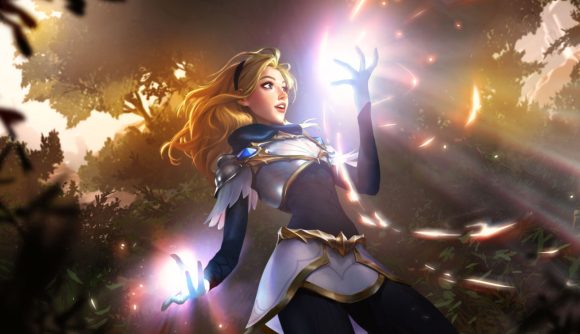 The first on the list of Riot’s new collectable card game, Legends of Runeterra, which we saw last week when we visited Riot’s Dublin office. While we were there, the Riot Games team gave us a sneak peek at some of the League of Legends 10th anniversary announcements, and it’s fair to say we’re excited.

Although you might have heard whispers of some of these projects on the the grapevine, there are others that will catch you totally off guard. Without further ado, here’s the news Riot is dying to tell you about.

Wife of established LoL stalwart, Lucian, Senna has long since been a predicted future champion by fans. Given that Senna’s immortal soul was imprisoned by devilish soul-collector, Thresh, it’s unclear at this point in what state Senna will appear. Will she be a pawn of Thresh, or has she escaped from his hooks and chains? We’re hoping for the latter, as we’re a sucker for a badass lady who dispatches abusive kidnappers to the curb.

Either way, Senna hits the PBE on October 29, followed by live servers on November 10.

That’s right, the chaotic limited time mode, Ultra Rapid Fire which we’ve not seen in four years is making a return to the Summoner’s Rift. If that’s not enough for you, Rise of the Elements, a series of preseason gameplay changes built on Elemental Drakes will be added to the live server on November 10.

It’s already been leaked in many places, but League of Legends Wild Rift is officially the name given to the MOBA mobile and console port. The mobile version in particular has been designed from the ground up to be viable with few buttons presses, featuring a dynamic UI that provides necessary information without overloading the screen. Wild Rift will launch on mobile in 2020, with pre-registration on the Google Play Store available now.

Teamfight Tactics, an auto-battler strategy game, was released earlier this year. Based on the Dota 2 mod, Dota Auto Chess, this game mode pits players against one another in an hex-based tactical confrontation. New sets of champions and abilities will be launched every three to four months, starting with Rise of the Elements.

Just like League of Legends, the game is coming to mobile early in 2020. You can pre-register on the Google Play Store from October 16.

Riot, like Blizzard, is a fan of producing high quality animated cinematics for character reveals. Now Riot’s planning a full animated series, based on the lore and characters from League of Legends and the world of Runeterra. Producing a full series is a monumental challenge at the best of times, and Riot’s producing the whole series in-house rather than farming it out to an external studio. There’s certainly enough depth to the lore of League of Legends to allow such a series, which will launch next year.

Set in the League of Legends universe, Project L, as it’s enigmatically dubbed, will put champions in one-on-one combat. All we saw in Dublin was a proof-of-concept piece of art, showing Darius, champion of the Noxus Empire, facing off against Ahri, the Ionian fox empath. The rendition we saw suggested a traditional Street Fighter style set-up, with life bars and round structures, but who knows what the game will look like when it’s fully unveiled.

A brand new IP unconnected to League of Legends, this game has the stated goal of bringing CS:GO style twitch shooting to the world of Overwatch-style hero shooters. We saw a short GIF, which showcased some shooting, character mobility, and a special knife-throwing skill (not unlike Zenyatta’s charged attack). Overwatch is popular, but it’s undeniable that twitch reflexes aren’t the main focus. A game that includes the teamwork and character interactions of Overwatch, with the high skill ceiling of conventional shooters, is sure to have an audience.

Have you met “Project A?” pic.twitter.com/gEKP5LH3Az

We don’t have much more details about this yet, other than it’s a game, which is still in early development, that will allow you to explore the world of Runeterra with your friends. Cryptic.

If you’ve ever wanted a feature-length documentary about League of Legends by an Academy Award-winning documentarian, then you’re in luck. Leslie Iwerks has produced a film about the rise of the MOBA and its history told by the fans and the visionaries that built it. It’s available to stream now on Netflix.

Assemble an world-class League of Legends team and take them all the way to Worlds. Riot’s new management sim is like Football Manager but with LoL, and will launch with the LOL next year.

And that’s it for now! Not enough for you? Tough. Blame Riot, we’re just the messengers. Make sure you keep an eye on the League 10th anniversary celebration, where we’ll no doubt hear more about the above.

Laurence writes about video and tabletop games for a living, but try not to hold that against him. He's been published by GamesMaster, PCGamesN, UFO Press, and more.