You would be mistaken if you thought Riot Games’ upcoming collectable card game, Legends of Runeterra, was a Hearthstone clone. The visuals might be similar, with an interactive play mat featuring League of Legends-esque scenery and mechanical trappings inherited from Magic: The Gathering, but the flow and feel of Riot's new game is considerably different from Hearthstone, and indeed most other major CCGs available at the moment. This is thanks to its unique turn structure, which could lend itself well to the world of esports.

In traditional creature combat games, the turn structure is simple enough: you summon creatures, attack, or cast spells during your turn, then your opponent does the same. In Legends of Runeterra this isn’t the case. Instead, every round is played card-by-card, with each player taking it in turns to act in a call-and-response structure. So if you bring out a powerful creature, your opponent can cast a powerful spell to counter it. Combat is turn based, with the roles of attacker and defender rotating each round.

Overall this gives Legends of Runeterra and more intense, conversational feel. While in Hearthstone or Magic you can bring out as many creatures as you like as long as you have the mana, but in this game each move needs to be considered carefully. In many cases it’s better to attack straight out of the gate rather than bolstering your forces first, as attacking gives your opponent fewer options.

Additionally, rather than having a deck-wide hero with a reusable ability, in Riot’s new CCG, the named characters must be summoned like any other creature. They function like a blend between Planeswalkers from Magic and regular creatures, offering powerful deck-defining abilities that level up depending on their activity.

There are a lot of exciting ideas and potential paths

Given the look and feel of Legends of Runeterra, it’s easy to see how it has the potential to become a successful esport. The back-and-forth flow can be easily compared to a game of Street Fighter or Starcraft – there’s an intense level of immediate reactivity to it that sets it apart and makes it an interesting spectator experience.

We spoke to the developers about the potential for esports at Riot Games’ Dublin office last week. “We think the possibilities are there,” says design director Andrew Yip. “Obviously with the game being one-on-one, hopefully having a really high skill ceiling and lots of maths, and a long mastery curve, allows players to really get invested in improving at the game and finding ways to demonstrate how good they are at the game.” 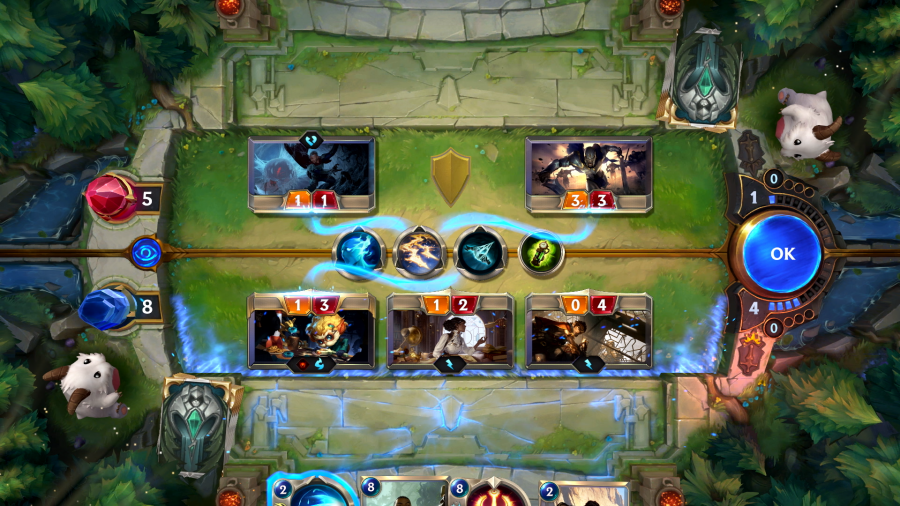 Despite that, the dev team are aware that players might not embrace the game in this way, and want to make sure to not put all their eggs in one basket. “We actually see a lot of different kind of end states for the game,” Yip says. “We want to better understand who loves our game and for what reasons before we really take those specific deep dives.” Andrew Silver, associate art director, adds, “That’s also the story of League of Legends itself as well. The original came out and had aspirations of esports…but we got there eventually because the players obviously wanted it and celebrated it.”

Sadly the devs played coy when we hounded them for more details on possible esports routes. “We won’t go into specifics,” Yip says. “There are a lot of exciting ideas and potential paths.”

It seems like Riot are planning on letting the community take the lead on the games direction once it’s out there, so keep an eye out for future info, and let them know if you want to see the game in the big leagues!

Laurence writes about video and tabletop games for a living, but try not to hold that against him. He's been published by GamesMaster, PCGamesN, UFO Press, and more.