It has been a bit of a strange time in the world of Runeterra recently. For the first time since we were introduced to League of Legends’ inaugural batch of Summoner’s Rift denizens over a decade ago, one of its champions spread her wings and appeared in a whole new arena. We’re talking of course about Jinx who, through Riot Games’ Arcane collaboration with Epic Games’ Fortnite, appeared aboard the Battle Bus.

With Jinx now out in the wild – something we should all probably be worried about – we wondered where some of League of Legends’ other 150+ champions could find a new home should they make a Smash-style entrance into another franchise or series. With most, if not all of LoL’s characters taking design inspiration from somewhere, it won’t be difficult to draw parallels.

From iconic films to some of the finest videogames out there, our list covers quite the span of media. Of course you, dear reader, may have your own ideas as to where these characters could hypothetically end up, but these are just some of the ideas we’ve been able to conjure up.

So, without further ado, here’s where we reckon some of Runeterra’s inhabitants could fit in. 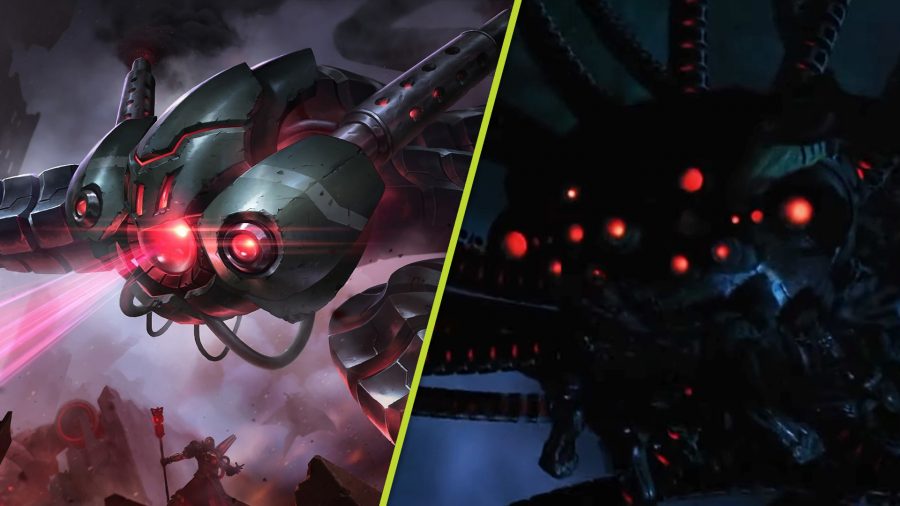 The moment Riot dropped Vel’Koz alongside his Battlecast skin all the way back in 2014, it didn’t take long for the links to the Wachowski sisters’ cult classic – The Matrix – to be made. With everyone’s favourite gangly void squid bearing a striking resemblance to the sentinels charged with protecting Machine City – complete with matching lasers – we reckon Runeterra’s very own squiddy would make a natural fit among his inorganic cousins. 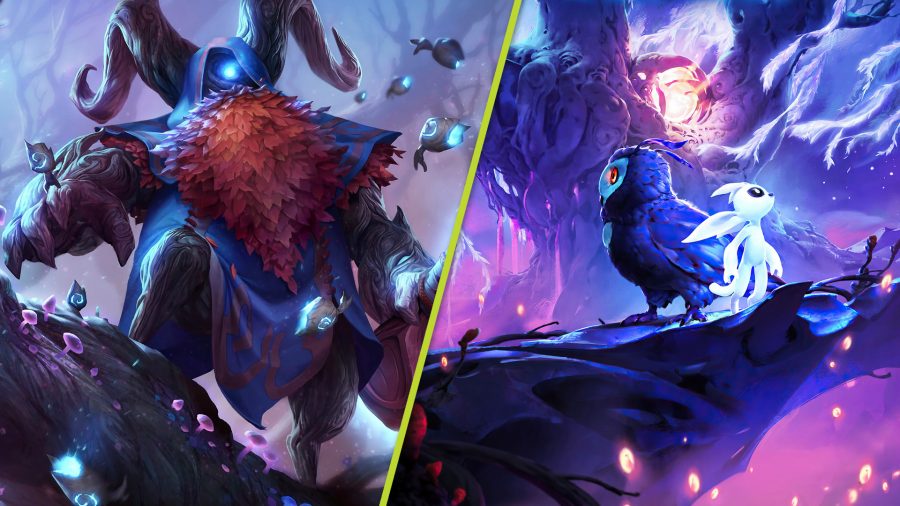 Action-platforming series Ori is renowned for its exceptional vibes, gorgeous soundwork, and uncanny ability to make you cry without any of its characters speaking a single word. To us, the spirit-faring Bard would seamlessly slot into this world, with his ‘Wandering Caretaker’ moniker making him the perfect NPC to help out Meep-hunting in certain areas of a (hypothetical) future instalment. 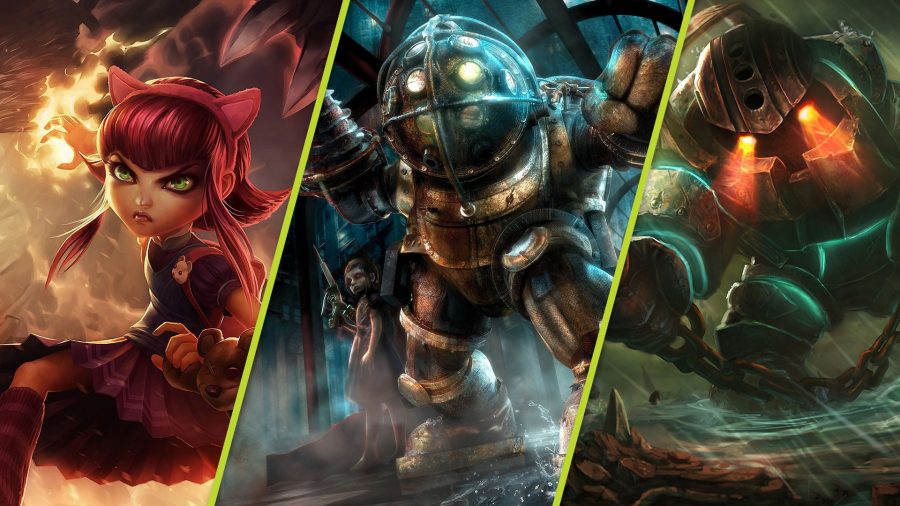 OK this one is just a bit of a stretch – after all we all know Annie can more than hold her own out on the Rift without a hulking metal man babysitting her. However, the pair would make for a dynamic duo down in Bioshock’s Rapture, despite the Dark Child clearly preferring the company of her giant fiery bear, Tibbers. 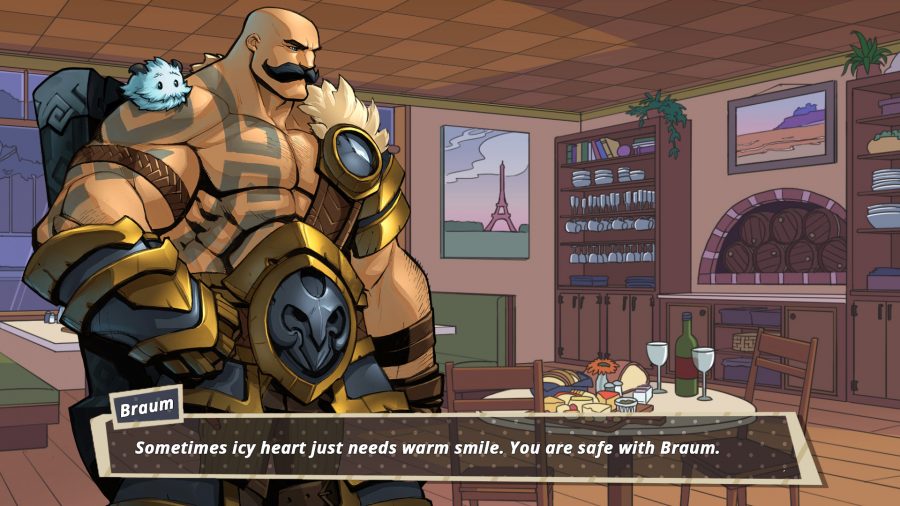 As Braum says, “the heart is the strongest muscle”, and boy does the moustachioed Freljordian make our collective kokoros go ‘doki doki’. Riot has clearly shown it’s pretty darn good at making games outside of MOBAs, so maybe it’s time for Runeterra to get its own dating sim, or for the Heart of the Freljord and his wholesome fatherly energy to be wined and dined elsewhere. 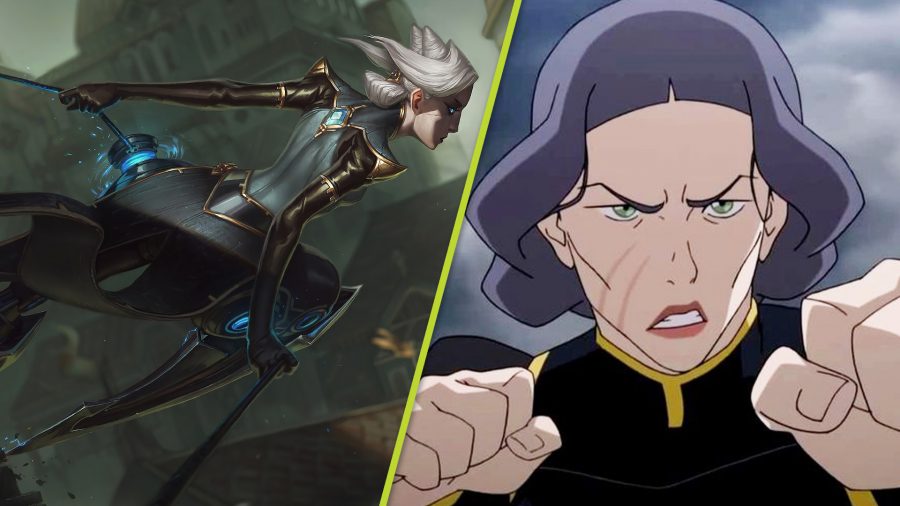 Camille (Avatar: the Legend of Korra)

When Camille first zipped her way into my lane and clapped my cheeks back in 2016, I was instantly reminded of Avatar: The Legend of Korra’s metal-bending chief of police, Lin Beifong. Although Camille’s grapples were the result of hextech augmentation, rather than being able to naturally bend metal, we can see the Steel Shadow becoming a solid addition to Republic City’s finest – especially as the elite intelligencer she is for Clan Ferros.

There are others like Rell and Taliyah – champions which are able to bend the elements to their will through magic – who would also find themselves at home within Korra’s world. Rell’s weaponised ferromancy and Taliyah’s propensity for throwing rocks could see them make fine challengers in Republic City’s pro-bending arena. 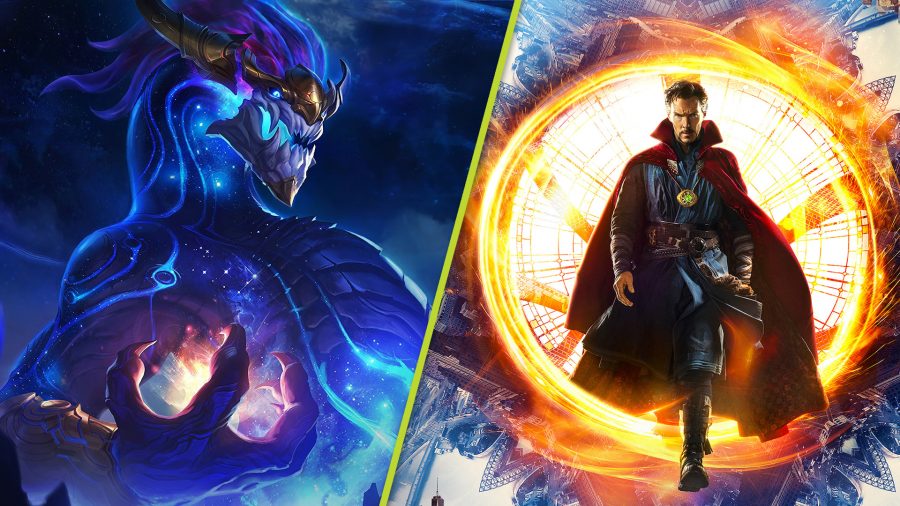 Aurelion, we have come to bargain.

The fact that Aurelion Sol is a gigantic primordial being of celestial origin – similarly to how Dormammu is depicted in the Marvel Cinematic Universe – is not the only reason we reckon the epic star dragon should come face-to-face with the Master of the Mystic Arts, Doctor Strange.

As the being who created the very stars which populate the Runeterran sky, we could see the star forger find his way into our own universe, only to be once again trapped by beings looking to utilise his power for their own purposes. Indeed, Aurelion’s hatred for humans would come into question should he be inevitably aided by none other than the human wizard with a snazzy goatee. 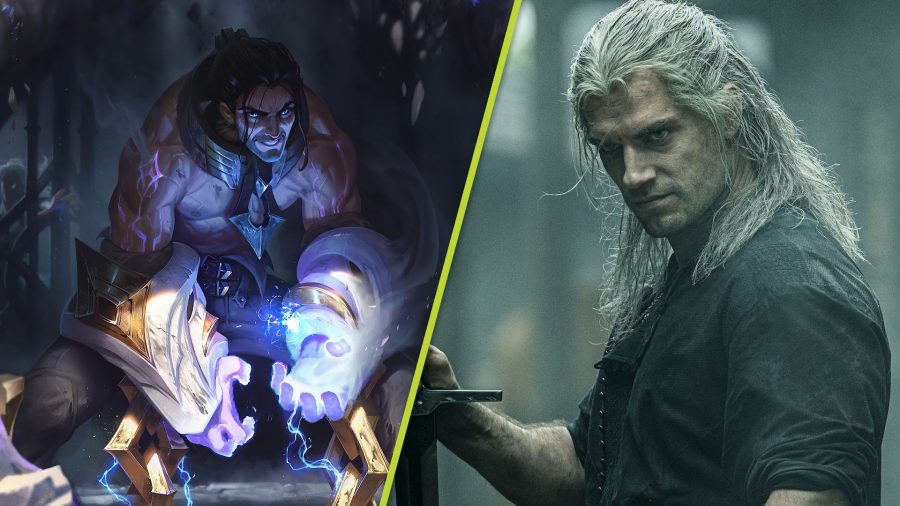 Sylas of Dregbourne loves a good prison break, and we know that The Witcher’s world has plenty of them. Rather than a Demacian Mageseeker, Sylas may have once been a Redanian witch-hunter thanks to his incredible sensitivity to magic, though similar events to those that occur in his Runeterran lore would see him and other mages-in-hiding eventually come to act against the Church of Eternal Fire, and even Radovid himself. 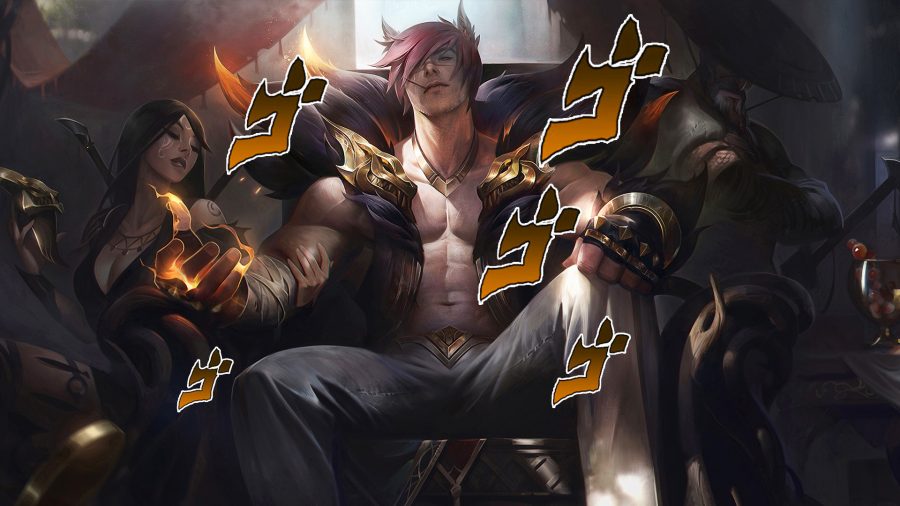 Sett is a living, breathing, ora-ora-ora’ing JoJo reference, and we could easily see him teaming up with Dio or Diavolo. While he doesn’t quite have the power of The World, time definitely stands still when he ults you into your team’s backline during a LoL ranks game – a trait we feel he’d carry over when dealing with the Joestars and their allies. 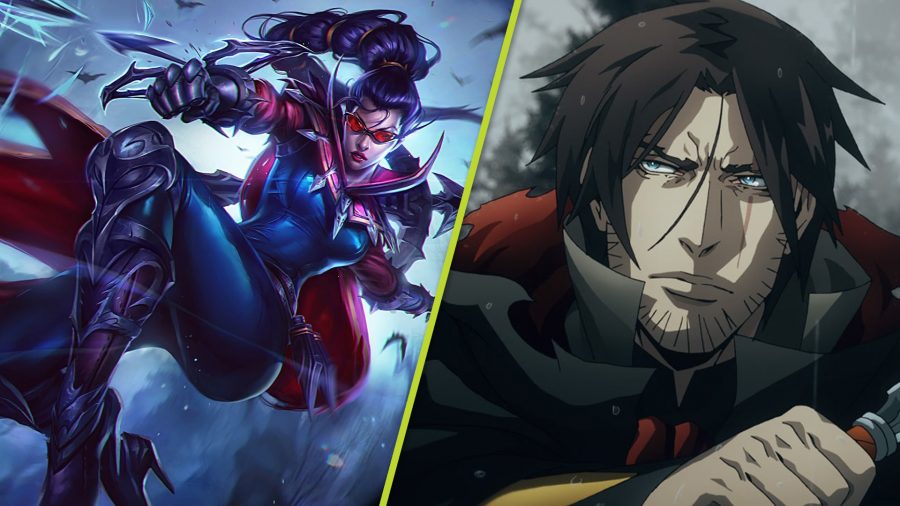 There are few champions in LoL who are nearly as cool as Shauna Vayne, but what if the monster hunter found herself joining up with the likes of Trevor Belmont? Considering both characters have a bit of a bee in their respective bonnets about monsters killing off their families, we can imagine the pair would get along famously – or just consistently cuss each other out. 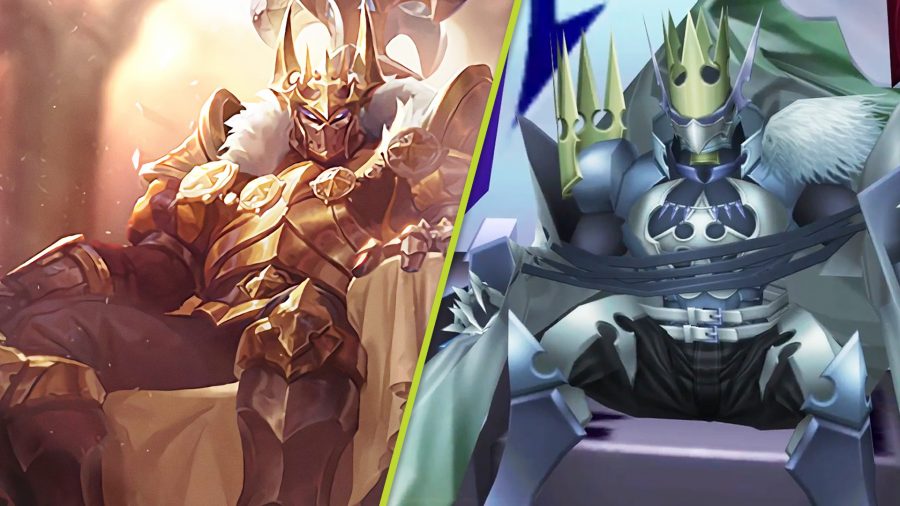 Back in the days where you could mod your own LoL skins into the game, there were plenty of Sora, Riku, and Kairis overlaying the models of Master Yi and Fiora. However, there’s one champion that we feel would make for a terrifying addition to the worlds of Kingdom Hearts, and that’s Mordekaiser.

With the power to bend souls to his will, we can imagine commanding an army of Heartless would be right up Mordekaiser’s alley. The fact that the Revenant’s King of Clubs skin bears striking resemblance to the sharp peaks of Xemnas’ armour in the second game definitely helps sell the fantasy. When he inevitably fails his conquest, we can imagine he’ll end up in Elden Ring next… 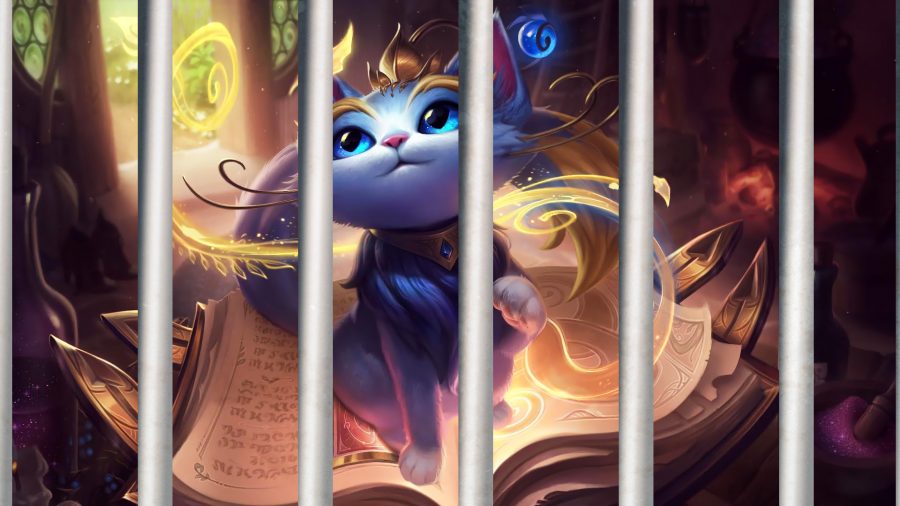 The only crossing over we’d like for Yuumi is the crossing over into a prison cell for eternity. It’s what she deserves, to be honest.

And there you have it, our pick of LoL champions we believe could fit into worlds beyond Runeterra. Of course, there are plenty of other potential crossovers out there, but for now let these get your brains whirring.