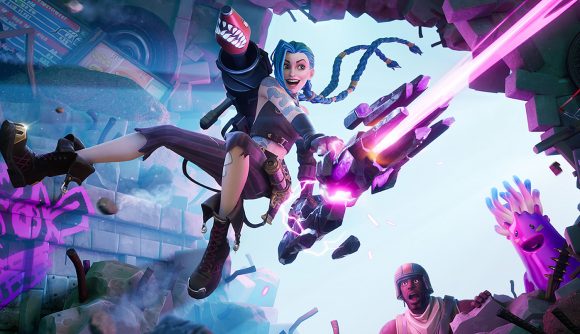 Last week we reported that League of Legends and Arcane star Jinx would be making her way to Fortnite, as part of an upcoming collaboration to promote the new Netflix series. Now, Riot Games has not only confirmed that she’s finally on her way today, but has given the full lowdown on what you’ll be able to snag from the Item Shop.

So, when is Jinx coming to Fortnite? Well, according to Riot you’ll be able to acquire the Loose Cannon from 8:00 PM ET today / 12:00 AM GMT November 5. Speaking on the crossover – which sees a League of Legends character step outside the world of Runeterra for the first time – Riot’s cross-product experiences and partnerships lead, Brandon Miao, says that the studio hopes fans will enjoy seeing Jinx in her new, destructive environment.

Alongside Jinx’s base character, players will be able to purchase a number of themed goodies including her Arcane Outfit, a ‘Pow Pow Crusher’ Pickaxe, a ‘Jinxed’ Spray, her ‘Dream Monkey’ Back Bling, an instrumental lobby track called ‘Playground’, plus two unique loading screens – ‘Wreaking Havoc’ and ‘Katchoo!’

Jinx’s arrival in Fortnite isn’t the only part of the deal struck between Riot and Epic Games, as LoL, Teamfight Tactics, Legends of Runeterra, and Valorant are all now available to players through the Epic Games Store.

We can’t wait to see Arcane Jinx jump off the Battle Bus! Welcome to the Island 🏝️https://t.co/GaubLR1wsM pic.twitter.com/E55PShBHbE

“Riot Games is one of the world’s best developers and creators of groundbreaking entertainment franchises,” says VP and general manager of the Epic Games Store, Steve Allison. “We’re excited they’ve chosen to partner with us to bring their titles to millions of new players through the Epic Games Store.”

The first instalment of Arcane’s three-arc series arrives on Netflix at 10:00 PM ET November 6 / 2:00 AM GMT November 7. This exciting new exploration of Runeterran lore is set to give us an insight into the backstories of beloved characters – including Ekko, Vi and, of course, Jinx.