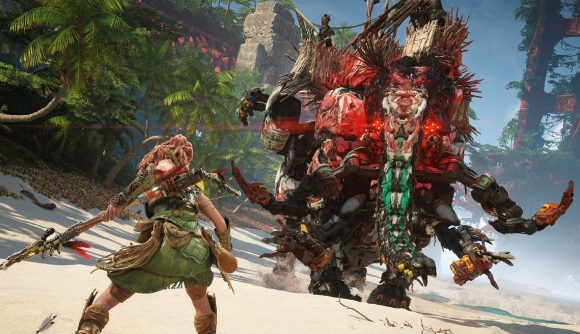 The Horizon Forbidden West release date is inching ever closer, with the next stage of Aloy’s story soon to unfold. Unfortunately for those hoping to avoid spoilers ahead of the machine hunter’s return to our screens, a PlayStation 4 build of the game appears to have leaked.

Yesterday, two screenshots of the build were uploaded to Reddit, showing Aloy in one of Forbidden West’s lush forests. VGC’s Andy Robinson has since received confirmation that the build is in fact legitimate, and “other than some missing art assets, contains the entire core content planned for the final game.”

This isn’t the first time that leaks of this magnitude have occured. Back in 2020, huge spoilers for Naughty Dog’s The Last of Us Part 2 emerged, prompting a public message from the studio. Meanwhile, a complete rundown of Halo Infinite’s campaign found its way onto the internet several months before its December 2021 release.

If you’re not actively avoiding Forbidden West spoilers, you can check out two screenshots of the leaked build below. While only the last gen version of the game, we can already tell Forbidden West is looking real good.

With just over a month to go until players can finally dive into the Forbidden West, social media could very well become a minefield of spoilers. At this point, we’d definitely recommend muting some of those keywords on Twitter and exercising caution if you’re trying to avoid them.

Recently, official information around Horizon Forbidden West’s tribes was released, revealing details about four main tribes and one mysterious, nameless faction that could well be the main common enemy of the game’s story.