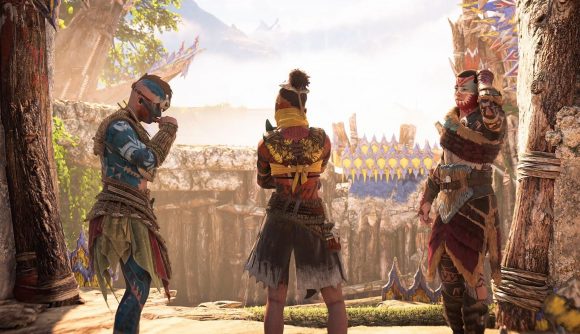 A new trailer and PlayStation Blog post for Horizon Forbidden West has teased that at least five tribes will feature heavily in the game’s story and has shown off some of the factions that you can ally with or battle against. Four of the Horizon Forbidden West tribes are referenced by name – the Oseram, Carja, Utaru, and Tenakth – and a mysterious fifth is also briefly mentioned.

The Oseram and the Carja will be familiar to those who played the first game, Horizon Zero Dawn. These factions were the main groups of Zero Dawn’s story, and will return in Forbidden West.

The Utaru inhabit the area of Plainsong, and can be seen in the trailer collectively singing to try and heal the land of a “red blight” that threatens to “destroy the cycle of life and rebirth”.

The Tenakth, meanwhile, appear to be a more hostile tribe. This tribe is also described as being split into three unique clans, which despite past hostilities are now unified against a group of rebel Tenakth who appear to have tamed the game’s machines, led by someone named Regala.

Then there is a mysterious fifth faction, which is described as being even stronger than Regala and her machine-wielding Tenakth. All that is said of the currently nameless tribe in the trailer is: “Strangers pass the shore, searching for secrets on the very edge of the West.”

We won’t have long to find out just who this mystery tribe is, as the Horizon Forbidden West release date of February 18 is only a few weeks away now. Plus, the journey through the world of Horizon won’t end there as Sony has just unveiled Horizon Call of the Mountain for PSVR 2.