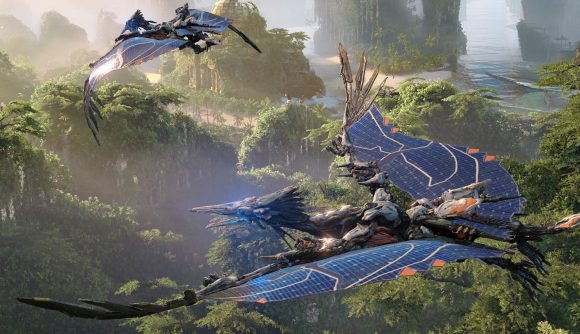 The embargo for Horizon Forbidden West reviews is up and a flood of information has made its way into YouTube videos and onto websites, including one feature that many were asking for ahead of release: flying mounts.

Yes, for the first time in the franchise, Horizon Forbidden West has flying mounts and it looks like they will be required for some of the quests in the game. The feature was spotted by Powerpyx, which unveiled the trophy list for the game. One trophy is tied to flying mounts, asking you to complete two quests that require you to live out your robo-dino flying fantasies.

An image from the game, which was showcased in a review and spotted by ‘InfoPlaystation’ on Twitter shows Aloy riding a Sunwing. We presume this to be the only rideable Horizon Forbidden West machine in the game, as you couldn’t ride Glinthawks in the original game and they are a lot more hostile than the Sunwings appear to be.

Pair flying mounts alongside the Pullcaster, Shieldwing, and ability to swim and Horizon Forbidden West looks like it is offering far more freedom than the first game. Let’s hope you don’t have to wait until the final act of the game to get access to the ability to ride these majestic, winged creatures.