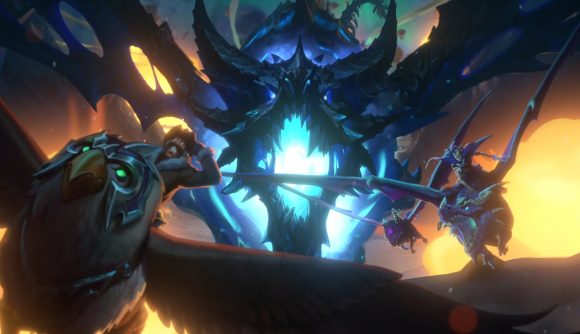 Last month Blizzard caused an international uproar after issuing a one-year ban to Hearthstone Grandmasters competitor, Chung ‘Blitzchung’ Ng Wai and rescinding his prize earnings after he proclaimed, “Liberate Hong Kong, revolution of our age!” in a post-match interview. The commentators of his match were also fired.

Blizzard’s response, which concluded that “We will always respect and defend the pride of our country,” stoked the flames further, as did Blizzard’s week-long silence. They finally put out an official statement on Friday, late in the afternoon in the US. The statement admitted that they had merely been too hasty in their judgment and claimed that the ban was not politically motivated. They cut Blitzchung’s ban in half and re-awarded him his prize money.

It was unclear how Blizzcon would be received. Would there protests outside? Would presenters be faced with a chorus of boos and protest slogans? Would anyone show up in Winnie the Pooh cosplay to mock Chinese President, Xi Jinping, who famously hates being compared to the silly old bear.

Blizzcon’s opening ceremony began with Blizzard’s President, J. Allen Brack, addressing the controversy in vague terms. He began by saying, “Blizzard had the opportunity to bring the world together in a tough Hearthstone esports moment about a month ago, and we did not. We moved too quickly in our decision making, and then to make matters worse we were too slow to talk with all of you.”

He did not mention any specifics of the incident, the names of those who faced consequences, the nature of the protests, any ongoing protests outside, or the negative response to their prior statement. Brack did use the words, “I am sorry,” and “we will do better,” but without specifics.

“We didn’t live up to the standards we set for ourselves. We failed in our purpose. And for that, I’m sorry, and I accept accountability” pic.twitter.com/Ud5U7XLV6A

Judging by the crowd reaction, his words were received warmly by opening ceremony attendees. That opened the way for a slew of announcements, including the unveiling of Hearthstone‘s next expansion set by Ben Thompson, Hearthstone’s lead artist. The final set of Hearthstone’s Year of the Dragon is aptly titled Descent of Dragons.

The story of the set takes place in Dragonblight and focuses on Galakrond, the progenitor of all dragons. Galakrond was actually featured in a previous Wrath of the Lich King questline where The Scourge attempted to exhume his corpse and raise it as a Frost Wyrm.

A handful of major new features were shown during the opening ceremony and a later panel which took a closer look at the expansion. Sidequests were shown, and seem to be like quests but less dramatic and powerful. An example they showed was a one-mana mage card called Learn Draconic. The card’s condition is to spend eight mana on spells, and the reward is a summoned 6/6 dragon.

Every class will be getting a unique legendary dragon. The classes associated with the League of E.V.I.L (Warlock, Warrior, Rogue, Priest, Shaman) will each get a variation of Galakrond which is not only a legendary hero card for each of those classes, but can also be upgraded by the new keyword, Invoke.

They used Galakrond, the Nightmare as an example. It’s a seven mana hero card that says: “Battlecry: Draw one card. It costs (0). Invoke twice to upgrade.” Seal Fate is a new three-mana spell which deals three damage to an undamaged character and “Invokes Galakrond.”

When Invoked and upgraded once, the card becomes Galakrond, the Apocalypse. Its battlecry changes from drawing one free card to two. It can again be upgraded by invoking it twice more so that it becomes Galakrond, Azeroth’s End which causes you to draw four free cards and equip a 5/2 claw.

Finally, they revealed a new game mode said to be core to the game in the same way as tavern brawls and arena runs are: Battlegrounds. It is an eight-player mode inspired by the auto-battler genre of games like Autochess, Dota Underlords, and Teamfight Tactics. An open beta for the mode will take place later this month.

Descent of Dragons launches on December 10.