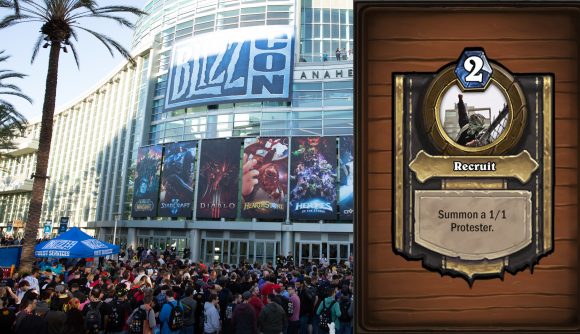 BlizzCon is kicking off today, yet there is a very real chance that focus will be on what’s happening outside the Anaheim Convention Centre, rather than on the action inside. A large group of protesters are expected to picket the outside of the venue following Blizzard’s decision to ban a Hearthstone player for shouting “Liberate Hong Kong” during a post-match interview. While many of the protesters will be wielding the usual placards and banners, one campaigner has become a little more creative in finding a way to spread her message.

Kirstin Adams-Bimson is a California-based photographer, who describes herself as a “long-time Blizzard gamer,” and she’s so outraged by Blizzard’s attempts to curtail free speech that she’s created an entire Hearthstone deck for protesters to use at today’s event. The deck, which she’s called HarshTone: Every Voice Battered, is a play on the game’s name, but also ‘Every Voice Matters’ – one of Blizzard’s core values.

The inspiration for the deck, which features cards such as ‘The Eye of Horus,’ ‘International Support,’ and ‘Concerned Citizen,’ came in part from the Gamers For Freedom Discord, but also from the design of Magic The Gathering, and how its cards tells stories about characters, factions, and moods. And while Adams-Bimson has quietly released her deck online today, she’s done so because she feels betrayed by the company she grew to love.

“For me, this protest feels personal,” she tells The Loadout. “Blizzard games have played a very large part in my life, and helped me get through a very difficult period in my young adulthood. I’ve always liked the company, and admired their ‘by gamers, for gamers’ approach. Over the years though, I’ve become increasingly concerned with the direction of the company.

“I’ve played and invested less money in their games than I otherwise might have because of this; but there has never been anything of grave significance or concern for me that would prompt me to stop playing their games – at least until the Blitzchung ban.” 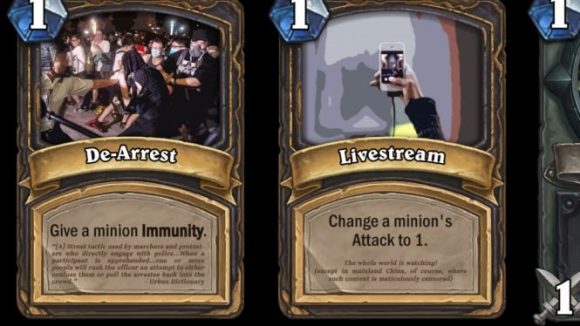 What Adams-Bimson is referring to here is Blizzard’s decision to ban Chung ‘Blitzchung’ Wai Ng following his post-match interview at Grandmasters where he called for the liberation of Hong Kong. Although the company has since reduced Blitzchung’s ban and reinstated his prize money, it has been thrown into a catastrophic PR nightmare, in which gamers believe free speech is not tolerated.

And although the photographer can’t be at the protest today, she hopes that her cards will make their way onto the streets, and create awareness about the Blizzard issue in a unique and creative way that  sparks debate and inspires further reading.

“Blizzard is a multi-million dollar industry giant – a pillar of the gaming community,” she says. “Their word and opinion has tremendous sway within the industry, and in a situation like the one with Blitzchung where there is a large intersection of parties and issues, has sway in geopolitics, too. That’s the nature of being a giant. Blizzard wanted large-scale success, well it comes with large-scale social, ethical, and political responsibilities.

“What I most hope the cards might do is create conversation and spread awareness. What I’d like to see is people printing their own decks at home – introducing them to friends, bringing a couple decks to school or university, or to your local card shop to play. I want to see people searching for the quotes I used in the flavor text – and read the article they came from. There is so much going on, and the issues in Hong Kong and China – and their ramifications globally, are enormous.”