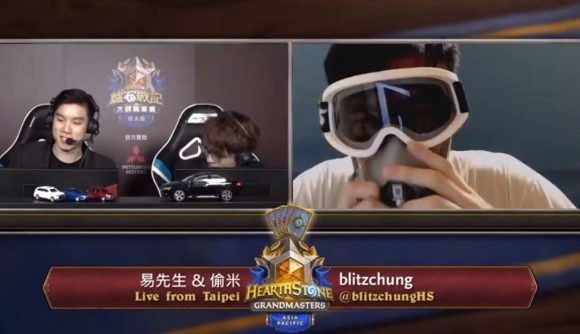 October 13 Blitzchung has responded to Blizzard’s statement but has not confirmed if he will return to the Hearthstone scene.

After a solid week of protests from the gaming community, Hearthstone player Blitzchung, who shouted “Liberate Hong Kong” during a post-match interview, has had all the prize money he won from Grandmasters returned by Blizzard and his ban reduced from one year to six months. The news comes as Blizzard finally breaks its silence on the matter, which has split its player base significantly.

J. Allen Brack, the president of Blizzard Entertainment, has ruled that because Blitzchung played fairly at Grandmasters, he deserves to have his prize money reinstated, but because both he and the two casters took the conversation “away from the purpose of the event,” their bans – albeit reduced – still stand.

The president claims that the decision to ban the players and the two casters was not influenced by Tencent (who own a portion of Blizzard) or its relationship to China, but rather the company’s core values of ‘Think Globally: Lead Responsibility’ and ‘Every Voice Matters’. Although Blitzchung voiced his own opinion of Hong Kong, Blizzard deemed him to have broken tournament rules.

In the statement, he says: “Over the past few days, many players, casters, esports fans, and employees have expressed concerns about how we determined the penalties. We’ve had a chance to pause, to listen to our community, and to reflect on what we could have done better. In hindsight, our process wasn’t adequate, and we reacted too quickly.

“We want to ensure that we maintain a safe and inclusive environment for all our players, and that our rules and processes are clear. All of this is in service of another important Blizzard value—Play Nice; Play Fair.

“In the tournament itself blitzchung *played* fair. We now believe he should receive his prizing. We understand that for some this is not about the prize, and perhaps for others it is disrespectful to even discuss it. That is not our intention.

“But playing fair also includes appropriate pre-and post-match conduct, especially when a player accepts recognition for winning in a broadcast. When we think about the suspension, six months for blitzchung is more appropriate, after which time he can compete in the Hearthstone pro circuit again if he so chooses. There is a consequence for taking the conversation away from the purpose of the event and disrupting or derailing the broadcast.”

Blitzchung, who can choose to return to the Hearthstone circuit after six months, tweeted that he’s not sure he will return to the esport and that a six month ban is still quite long.

He says: “I’m grateful for Blizzard reconsidering their position about my ban. Earlier this week, I told media that I knew I might have penalty or consequence for my act, because I understand that my act could take the conversation away from the purpose of the event. In the future, I will be more careful on that and express my opinions or show my support to Hong Kong on my personal platforms.

“Blizzard had changed their suspension on me from a year to six months. Once again, I appreciate for their reconsideration on this. To be honest, I think six months is still quite a lot to me.”

Aside from thanking Blizzard for reconsidering the original decision in the statement, Blitzchung says he’s still not sure if he’ll be making a return to the Heartstone scene.

“Lastly, many people wants to know if I would be competing in hearthstone in the future,” he adds. “Honestly, I have no idea on that yet. Since my next tournament is very likely to be the grandmaster tournament of next season, it’s probably at least a few months from now on. I will take this time to relax myself to decide if I am staying in competitive hearthstone scene or not.

“Hearthstone changed my the way I live, I really love this community. Blessing to all the players out there, and blessing to Blizzard.”