Targets are tough enemies roaming about Halo Infinite’s open world and they are protected by hordes of other grunts and foes that are trying to protect them from the wrong end of Master Chief’s weapons.

Scattered across the Zeta Halo Ring, these targets are tougher versions of traditional enemies with more health, meaning that run-and-gun combat tactics against them don’t always work. We have found staying at a distance or using a flying vehicle to be the best option, so searching out a Banshee location or a WASP location in Halo Infinite is a smart idea.

But, while these targets can be revealed by reclaiming all the FOB locations on the map, you may just want to hunt them down early on to bag their weapon variants. Read on to see the Halo Infinite Target locations, so you can get some of the more unique weapons in the game.

There are 15 Targets to be hunted down in Halo Infinite’s campaign. These are split across each of the open world areas in the game: 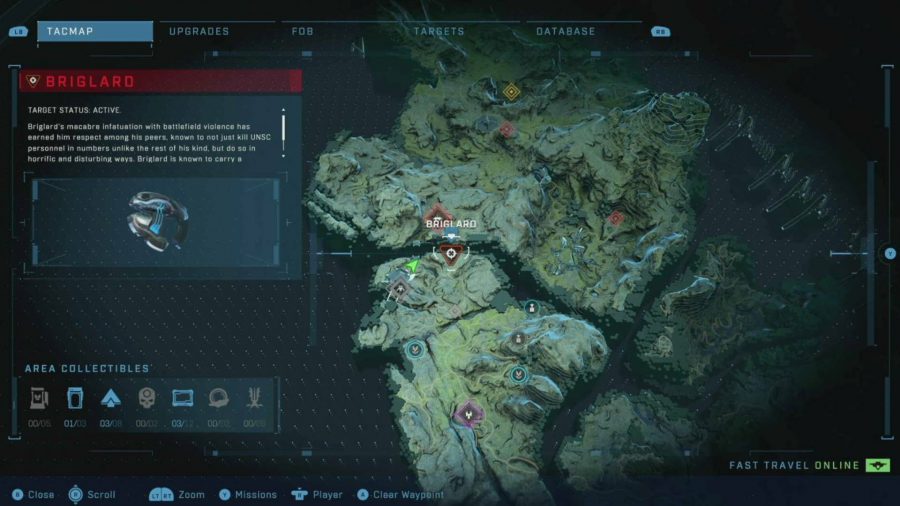 The Briglard Target can be found just north of The Tower, along the edge of the area. He unlocks the Unbound Plasma Pistol as a reward from FOBs. 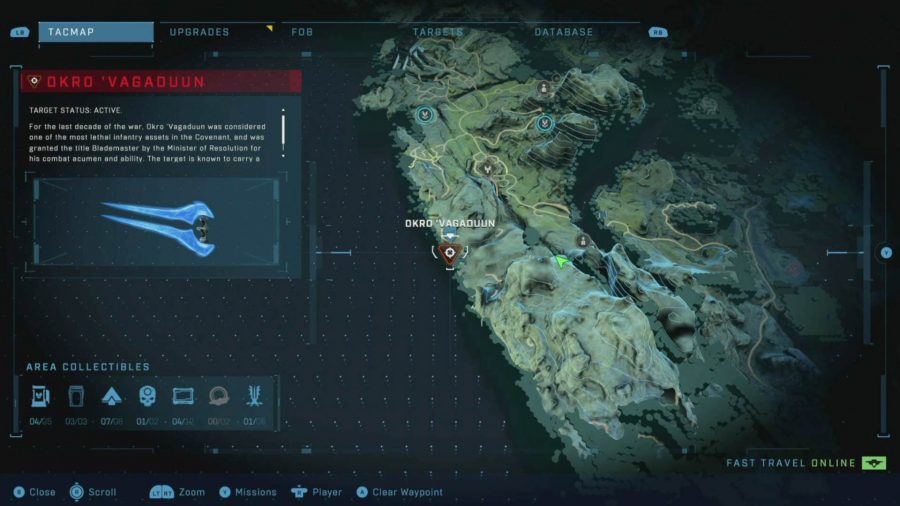 Okro ‘Vagaduun, can be found in the far south of the map. They are patrolling along the edge of the land and will unlock the Duelist Energy Sword from FOBs. 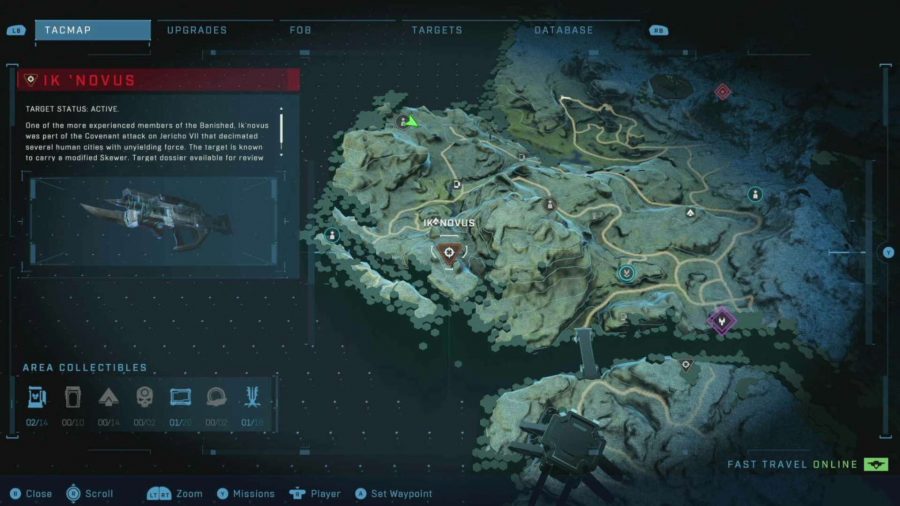 To get the Volatile Skewer Reward from FOBs, you will need to kill Ik ‘Novus, who can be found just across the bridge, at the top of a hill north of The Tower. 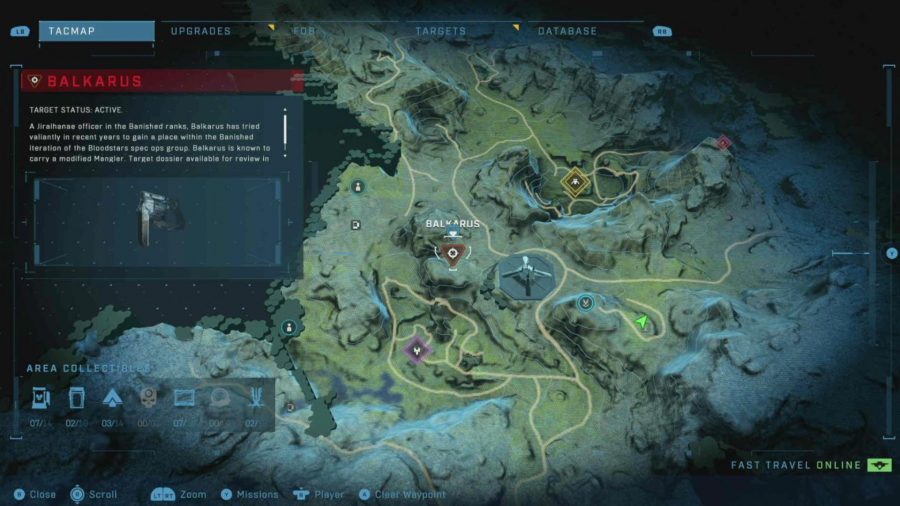 The Riven Mangler is unlocked from FOBs after killing Balkarus. Balkarus can be found patrolling next to a set of cliffs, just south of the Excavation Site. 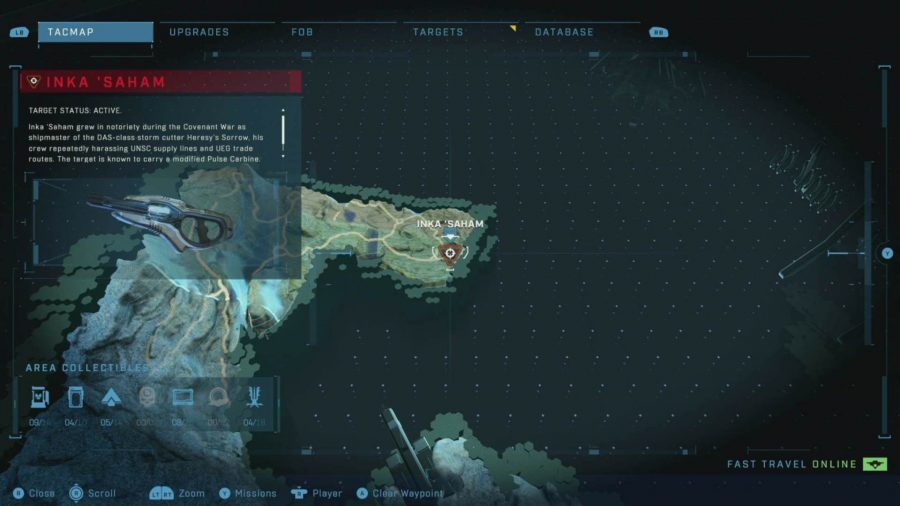 Inka ‘Saham can be found at the very top of the map. You will need to use your Grappleshot or head to the WASP location or Banshee location to get over to this piece of land. They are on the edge of the cliff and drop a Rapidfire Pulse Carbine. 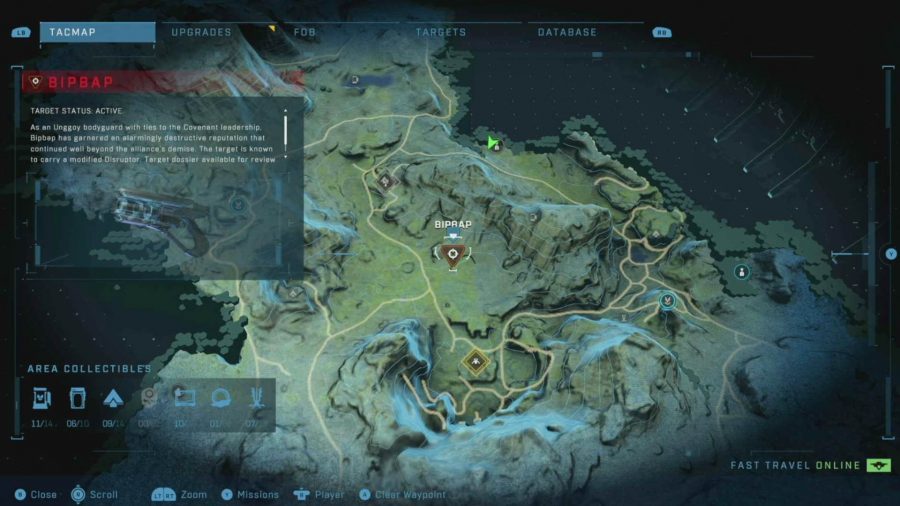 BipBap is found north of the Excavation site in an open field and drops the Calcine Disruptor upon being killed. 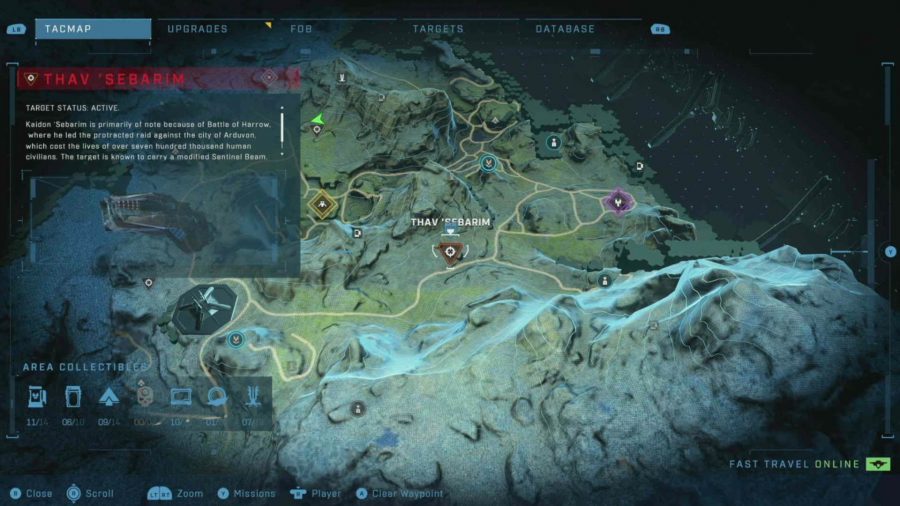 Thav ‘Sebarim can be found south-east of the Excavation Site, patrolling along a path. Killing them will drop the Arcane Sentinel Beam as a reward and unlock it from FOBs. 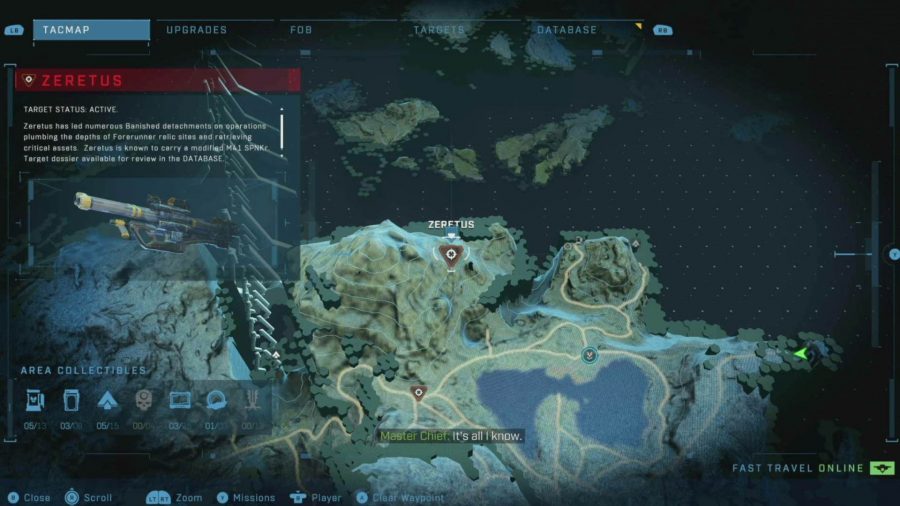 The M41 Tracker weapon variant can be found north of the body of water in the south section of the map. Killing Zeretus on this hill is a tough task, so bring some firepower. 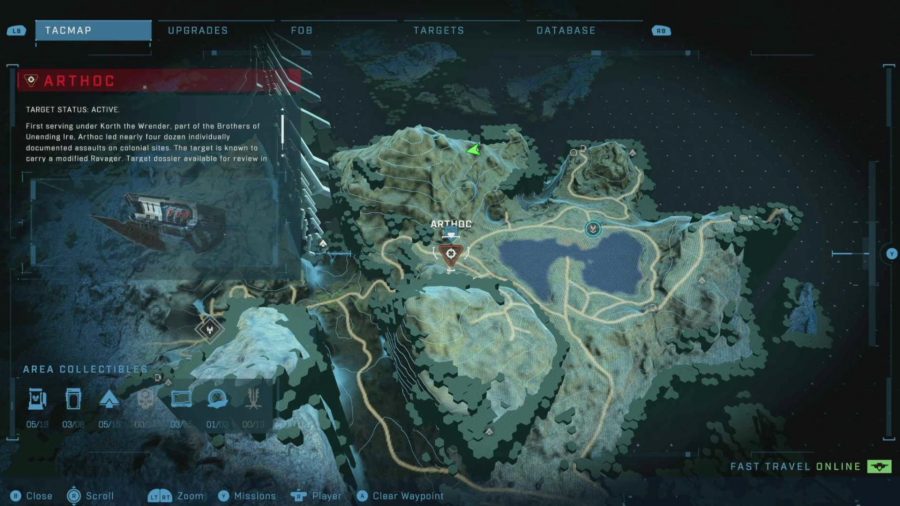 To grab the Ravager Rebound, you will need to kill Arthoc, who is sitting along the main path out of the far east section of the southern area of the map. 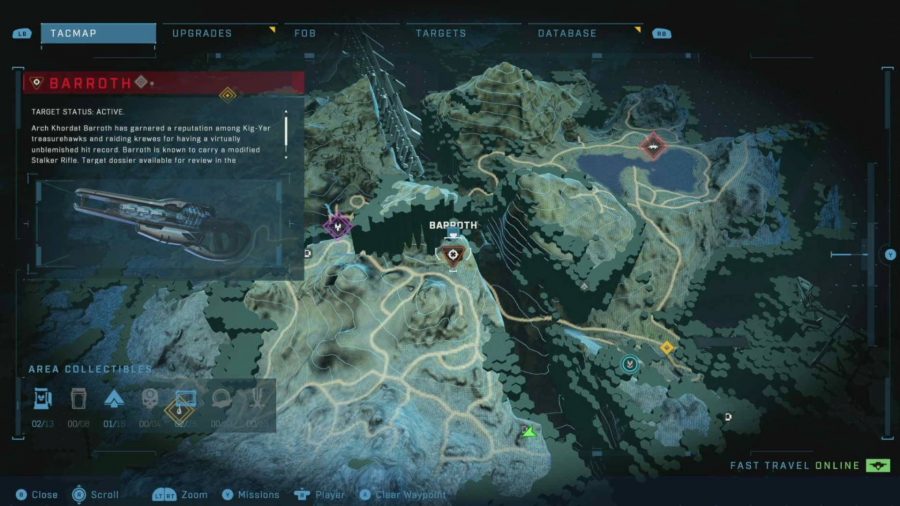 Barroth can be found high-up on the hexagonal structures in the south of the map, during the mission The Sequence. They will drop the Stalker Rifle Ultra. 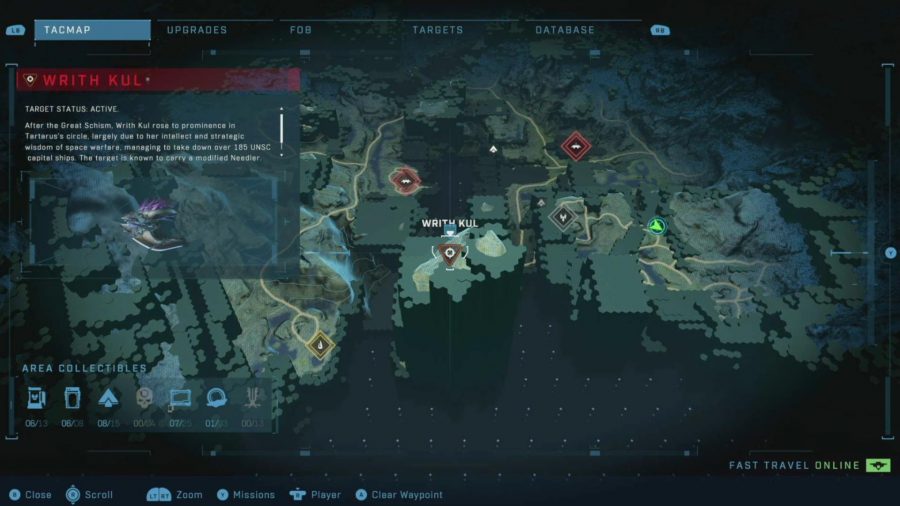 Wraith Kul is found up on a large hexagonal cliff, in the south of the map. Use a flying vehicle to get up here and you will be able to kill them and grab the Pinpoint Needler 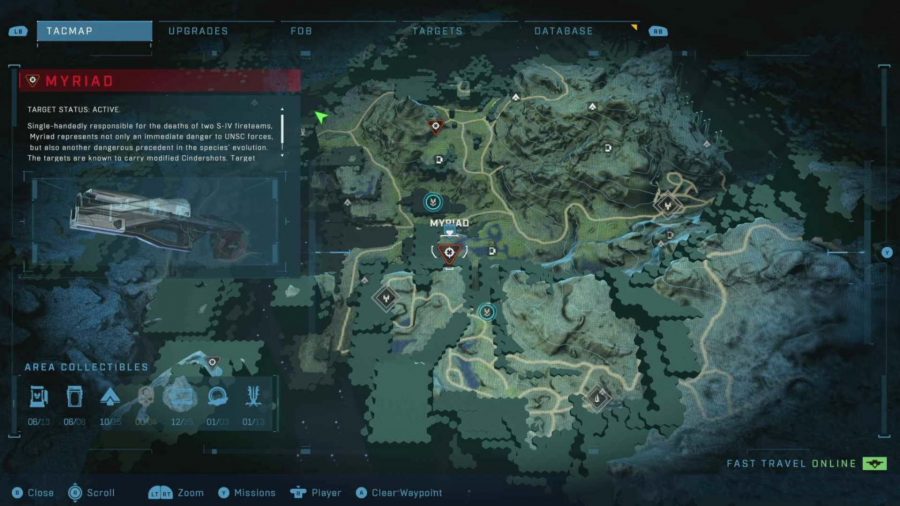 To grab the Backdraft Cindershot, you will need to kill Myriad, just north-east of the Annex Ridge. 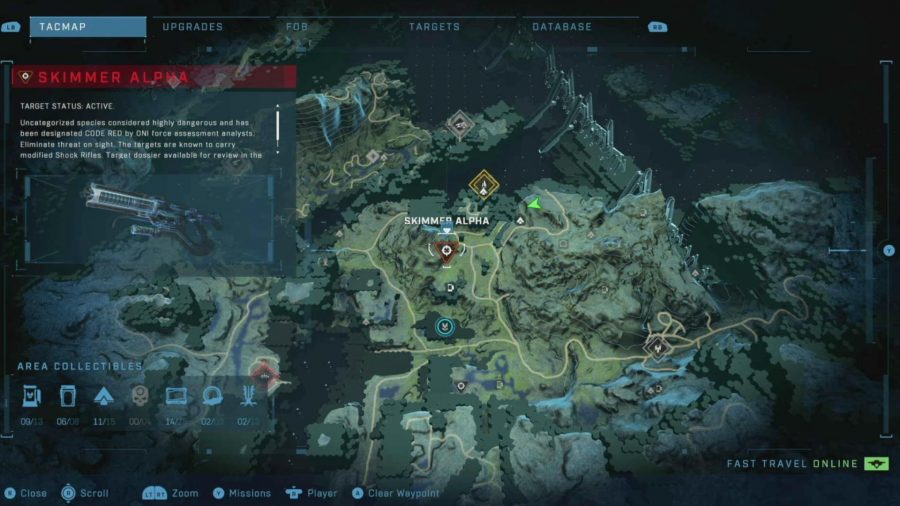 Skimmer Alpha are a pack of Skimmers sitting in a cave underneath a large hill. Fight them from afar to avoid getting taken out in one shot and you will get the Purging Shock Rifle as a reward and unlock it from FOBs. 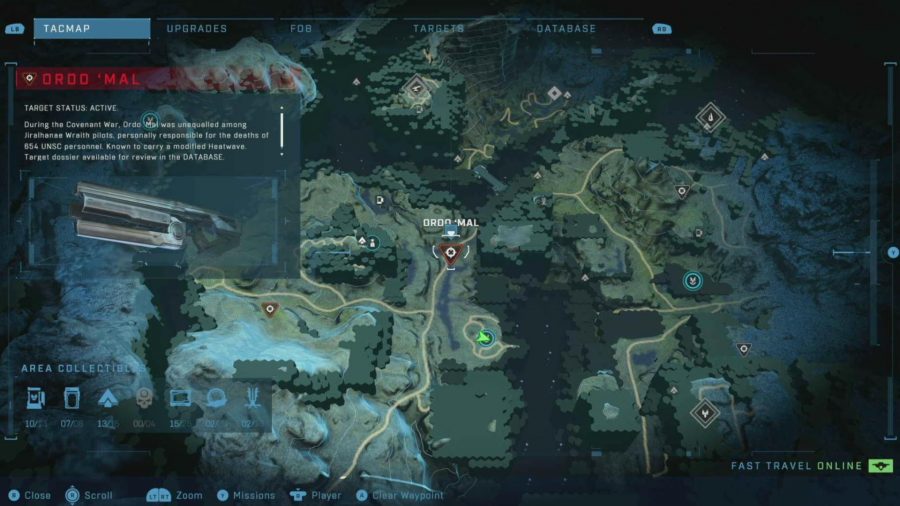 The penultimate target is Ordo ‘Mal and can be found along a main path in the western section of the southern area of the map. They will drop the Scatterbound Heatwave upon death. 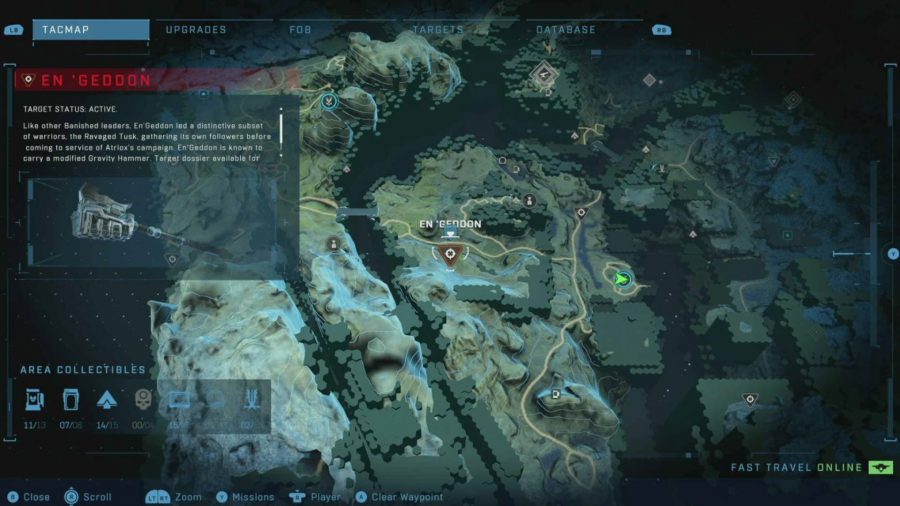 The final target location in Halo Infinite’s campaign in En ‘Geddon. This enemy is a pain to try and kill as he will lunge at you and jump from afar with his hammer. Try to use a flying vehicle to kill him and unlock the Rushdown Hammer.

That covers all the Halo Infinite Target locations. If you are looking for help with other objectives, check out our list of tips in our Halo Infinite walkthrough.