Square Enix seems to be all-in on streaming modes these days, but they aren’t turning out to be the silver bullet for DMCA claims that many streamers hoped for. Life Is Strange: True Colors’ streaming mode muted almost everything apart from sound effects during some scenes, creating some rather awkward and immersion-breaking moments. Guardians of the Galaxy has also just launched with a Streamer Mode of its own, and while it’s definitely an improvement on the one in True Colors, it still has its fair share of issues.

Guardians of the Galaxy is filled with licensed music that really invigorates the gameplay and cinematics, but the built-in Streamer Mode dramatically diminishes the impact of some moments in the game. Early on in Chapter One, there is an escape sequence set to I Ran (So Far Away) by A Flock of Seagulls. With Streamer Mode on, this track is completely removed and not replaced by anything, creating a void of silence that leaves the sequence feeling flat.

This is made even stranger by the fact that some other moments where licensed music is used are replaced by the game’s own, DMCA-safe compositions, compiled together on the Star-Lord album. However, it is incredibly inconsistent. As mentioned in our Guardians of the Galaxy review for PS5, some set pieces have replaced the licensed music, while others opt for silence. The main menu removes all music entirely and the Milano is often left in a void of background noise as nothing plays off the jukebox while exploring the ship.

The inconsistency here really dampens what is a fantastic experience and some great moments. There are around half a dozen tracks on the Star-Lord album, and they’re all great listens and suitable replacements for the copyrighted music, but they feel incredibly underutilised.

Plus, when the mode is active, the text ‘Streaming Mode: On’ is displayed at the top of the screen. It is always there, and while not distracting, it definitely is frustrating to have it there throughout the whole game. 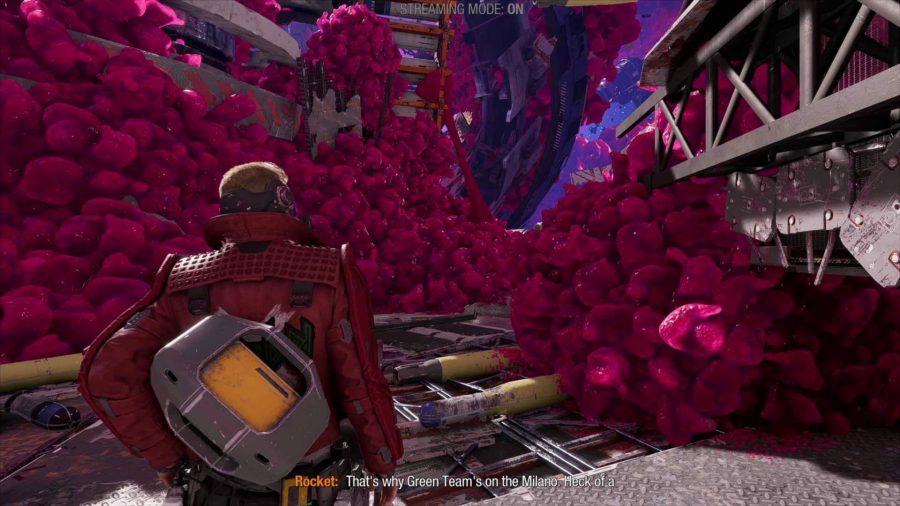 It’s worth noting that this is one of the better-implemented Streamer Modes out there, and livestreamers have already voiced their appreciation for the mode. However, despite its usefulness at keeping the DMCA wolves away, we are still aren’t at the point where the experience is preserved in a great way.

With the in-house music only covering over some of the moments of awkward silence, the Streamer Mode in Guardians of the Galaxy ultimately feels like a half-finished feature. It is clear we still have a long way to go before streamers are able to protect themselves confidently from DMCA claims, while still getting the best gameplay experience possible.

As this feature is used and tested more and more, hopefully we will see a perfect template emerge that developers can borrow from.