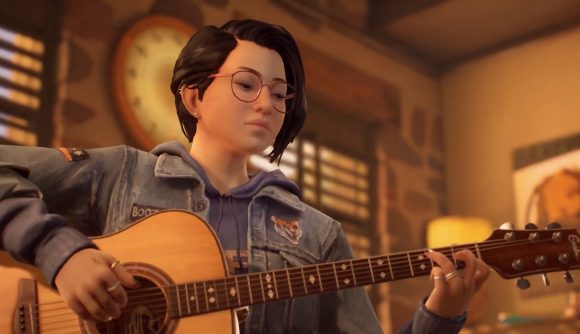 With DMCA claims on streams becoming more and more common, streamers have been looking for ways to get around licensed music, with the hopes of avoiding any issues down the line from record labels or rights holders. With demand for a solution so high developers have started to implement options to turn off licensed music for their games, which disables any risk of a DMCA claim.

However, Life Is Strange: True Colors‘ version of the  DMCA-safe mode doesn’t quite work in the way streamers were all hoping. With music being interwoven so deeply within the game, this mode would have had to replace that licensed music with royalty-free tracks or change the scene entirely. But, instead of doing that, the mode just mutes the scene almost entirely, leading to some awkward moments of silence for some streamers. But, some are also making the most of the opportunity, creating some great clips in the process.

Streamer ‘SarahKey‘ stumbled upon one of the main scenes from the game that is muted and couldn’t hold back her laughter at Alex and Gabe, jumping and dancing around a room to nothing but silence and the stomping of their feet on the floor.

The clip shows just how ridiculous it is and certainly makes this wholosome moment in True Colors look more like a comedy sketch.

*Game has a streamer mode that is DMCA friendly*

Another scene in the game, however, doesn’t quite hit the same jovial tone thanks to this mode. What is meant to be an emotional moment for Alex, where she plays a licensed song on the guitar evaporates into thin air as nothing is used to fill the gap of the licensed song and Alex is just playing the guitar in silence.

‘CeeJaey’, in this moment also goes on to highlight that the song playing doesn’t even include subtitles. So, if you play the game on this mode for the first time, you won’t have any idea what Alex is playing. This actually plays into a larger issue around copyright law, which NME details here.

But, some streamers are making the most of the silence and putting their own sound effects to the silenced scenes, such as Streamer ‘CuriousJoi‘, who manages to do a pretty good air guitar sound. Headphone users may want to turn down their sound for this one.

I love that there's a streamer mode for @LifeIsStrange…

You don't have to worry about DMCA… and it gives you room to be creative 😂 pic.twitter.com/7ZdUvr0ifp

With this mode and these features appearing in more and more games, it makes us slightly concerned if its implementation will be any better in another music-heavy, upcoming game, Marvel’s Guardians of the Galaxy.

It is clear that we still have a way to go before the optimum DMCA solution is found, as in this case, your experience with the game is greatly diminished if you do decide to stream in the Streamer Mode.