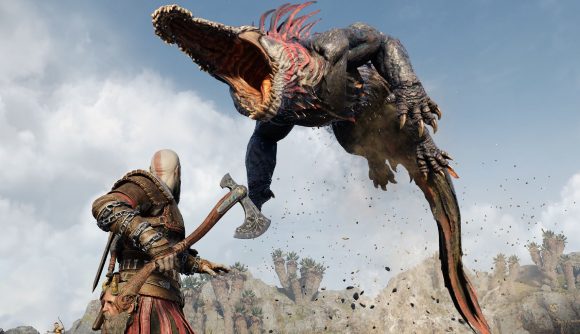 God of War Ragnarok‘s 2022 release date has been in question for a few weeks, following Microsoft delaying Starfield into 2023. However, God of War Ranganrok has been rated in Korea, suggesting it will indeed release on PS5 and PS4 in 2022.

The rating, which went live on May 26, 2022, doesn’t offer too much in the way of details about the game besides “excessive profanity in conversation”. Although, there are references to drugs and characters will drink alcohol in a pub. So, it looks like Kratos and Atreus might sit down for a barside beer at some point within the game’s campaign.

Games are usually rated three-to-six months before they actually released with other games like Horizon Forbidden West, Demon’s Souls, and more following that pattern. So, a release later this Summer or in the Fall seems like a good spot for God of War Ragnarok to fall.

Sony has remained relatively quiet about God of War Ragnarok since it was shown off in September 2021 last year and it has been suggested that Sony may not hold another showcase until September.

However, with this rating, we could be in store for the game to show up at Summer Game Fest 2022 during Geoff Keighley’s kickoff show. Sony has had a presence at Keighley’s hosted events in the past, including Gamescom Opening Night Live and The Game Awards.

Either way, ahead of the God of War Ragnarok release date, we should start to see a lot more about the game, especially after the accessibility settings for the action-adventure were just revealed.