It’s time for another exciting new season of Fortnite. While Season 6 of Chapter 2 saw players go back to their primal roots, Season 7 (titled Invasion) is going in an extraterrestrial direction.

Teasers, puzzles, in-game oddities, and leaks all pointed towards aliens being introduced in the Fortnite Season 7 event, and now the new Fortnite season is live, we can see them for ourselves. UFOs whizzing around the map, some updated POIs, and much more can be found in the new-look Season 7 map.

There aren’t many dramatic changes to the Season 6 map, and the layout of major POIs remains pretty much unchanged. However, there’s plenty of alien-themed additions and tweaks, plus new NPC types and locations and the return of vending machines. There’s a fair bit going on, and we’re here to tell you about all the new bits we’ve uncovered so far.

Here are all the Fortnite Season 7 map changes.

Fortnite Season 7’s new map hasn’t changed too much from the Season 6 map in terms of POIs.

The most notable difference is the removal of the centre POI of Season 6, The Spire, which was beamed away by the giant UFO that now looms over the map. In its place is a huge crater surrounded by purple alien matter.

In terms of the POIs that have changed, you’ll see that Sweaty Sands has become Believer Beach, and Colossal Crops is now Corny Complex.

The outline of Stealthy Stronghold remains on the new Season 7 map, but it is no longer a named POI.

You’ll also notice when you drop into a game of Fortnite that some POIs are highlighted in purple – these are the locations where UFOs and aliens are currently spawning.

As well as the POI changes mentioned above, there are a few smaller changes to the Fortnite Season 7 map.

The purple alien matter in the centre of the island can also be found scattered in smaller patches around the map. Some areas include between Boney Burbs and Holly Hedges or around Pleasant Park. These areas contain some alien NPCs and some of the new alien weaponry. 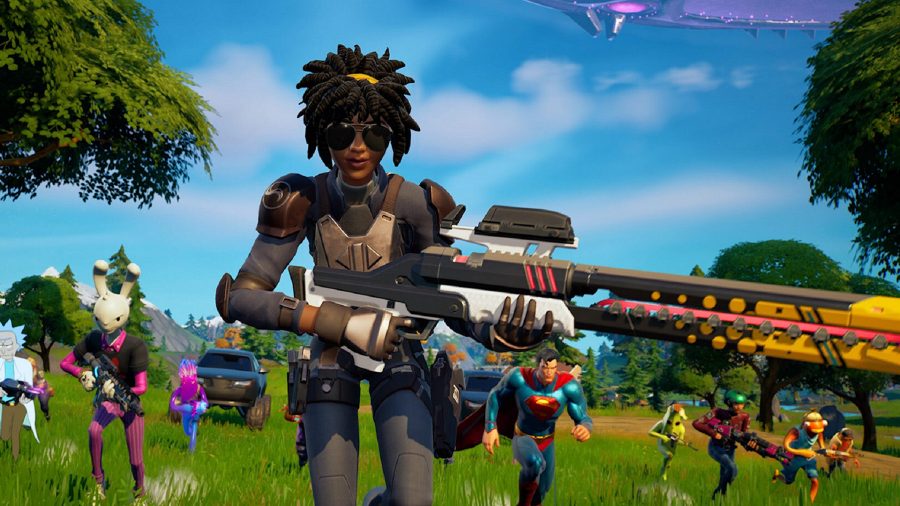 There are also large satellite dishes mounted on top of various hills and peaks around the map.

A returning feature to the new map is vending machines. You can find these scattered about various locations now, and ask for varying amounts of gold in exchange for a weapon.

Finally, you may also see some mysterious new chests dotted around the map. These are Cosmic Chests, which require a team-based puzzle to solve and drop lots of tasty loot and rewards.

Those are all the significant changes to the Fortnite map at the start of Chapter 2 Season 7, but bare in mind more may be on the way. The official description of this season says that “battlefield will be shaken up” as the war against the aliens progresses, so more map changes could be on the way deeper into Season 7.