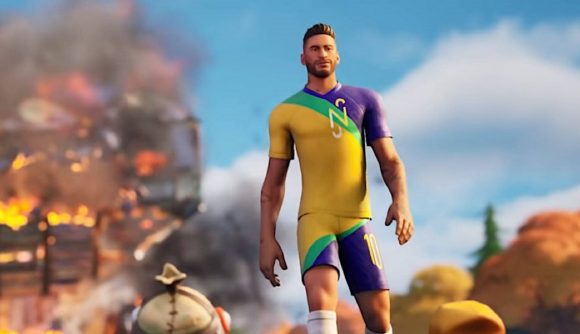 With most new additions or major crossovers to come to Fortnite, there are challenges for players to take on in order to unlock exclusive skins, cosmetics, or just to level up their battle pass. That’s exactly what happened when Neymar Jr appeared in the battle royale game, but things have gone a little awry.

In case you missed the news, Brazilian footballer Neymar Jr, arguably the biggest superstar in the game today, has made his debut in Fortnite. The Paris Saint Germain winger is a big gamer and has a history with esports, clutching a huge on-stream win against Team Vitality while playing Counter-Strike: Global Offensive.

The star entered Fortnite with the latest update, and the challenges to unlock and upgrade his skin include scoring goals with the soccer ball emote. American bastardisation of the beautiful game aside, this is where the problems are arising. Many players gather around the small football pitches on the Fortnite island with an unspoken truce, in order to try to score a goal and complete their objective. However, other players aren’t so kind.

Some players are camping at the objective locations, tooled out with high-level weapons and ready to take down anyone trying to complete the innocent challenge. While your progress doesn’t reset if you’re killed, it can be incredibly annoying to come so close to completing a challenge only to respawn miles away.

Some people will hate me after this.. from FortNiteBR

However, one player took it even further, taking to Reddit to showcase his driving rampage. The player drives a truck straight onto the football pitch, eliminating at least nine would-be Neymars in under a minute. While an unspoken truce is just that – unspoken – it seems rather unsporting to take down so many objective-goers in one fell swoop.

He may not have been sent off for this indiscretion, but many members of the Fortnite community have seen red at the prospect of such malicious intent.