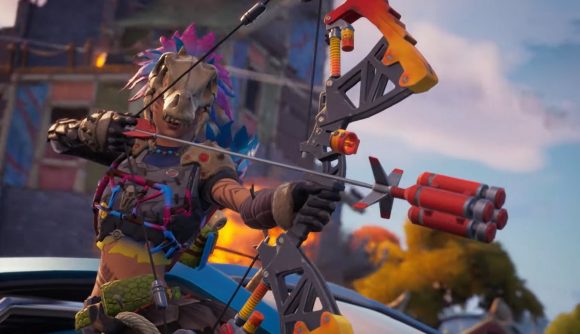 Fortnite’s new bow has a very cryptic description, and players are trying to work out exactly what it does, or more specifically what it fires. Fortnite Chapter 2 Season 6 has taken the battle royale back to basics, and players have been forced to use the most primitive weapons in order to claim a victory royale.

You can check out the full details in our Fortnite best weapons tier list, but in short, sniper rifles have been replaced by bows and arrows, and shotguns and assault rifles need to be crafted from their lowest Makeshift forms into Primal or Mechanical weapons that do more damage. We told you it’s all changed.

While it is certainly versatile, not knowing whether you’re using a Flame Bow, Shockwave Bow, Explosive Bow, or Stink Bow at any point in the match may put you at a disadvantage, and will certainly put your chances of victory in the hands of the RNG gods.

You can get your hands on the Unstable Bow by buying it from Rebirth Raven for 500 gold, so it’s really simple to get your hands on. The DC Comics NPC is located between Sweaty Sands and Coral Castle, a little to the west of both. It’s not a very popular drop spot, so you should be able to buy your bow without too much trouble.

With another bow coming to Fortnite and the Bocek Bow being added to Apex Legends in Season 9: Legacy, archery has never been better represented in the battle royale genre.