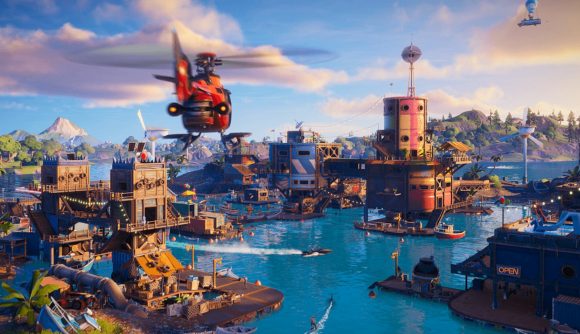 After Fortnite’s record-breaking The Device event signalled the end of Chapter 2: Season 2 on Monday, Chapter 3 has now arrived with a flooded map, new mobility mechanics, and much more.

The new season, which is aptly titled Splash Down, went live earlier today and sees a number of new points of interest and map changes added to the now semi-submerged island. And with all that water, there’s new ways to get around such as whirlpools that send you rocketing upwards and rideable sharks to get around the map. Epic has also revealed that the water levels will recede over time throughout the season, revealing more locations as the weeks go by. This will also pave the way for the introduction of cars later in the season when there is more dry land.

Aside from the map and mobility changes, the biggest shift appears to be in making survival much easier for this season. A swathe of new healing items have been introduced (such as the Bottomless Chug Jug, which gives players unlimited Chugs but with a recharge time in between each use) as well as general nerfs across the board for weapon damage in order to increase the time it takes to eliminate a player.

While not confirmed by Epic, there also appears to have been a nerf to aim assist, which has been one of the most divisive and controversial talking points in competitive Fortnite for some time between controller and mouse and keyboard players.

Aim assist has been nerfed again in Season 3 pic.twitter.com/COgkdIVxpm

Chapter 2: Season 3 has been one of the most highly anticipated seasons in Fortnite ever. After suffering a number of push backs and with The Device attracting so many players Epic had to put a cap on its servers, Splash Down will likely be one of the most played and memorable seasons in the game’s history.