FIFA 22 introduces a new type of item into Ultimate Team that aims to give players the nostalgia of an Icon card but (hopefully) without the large price tag. They are called FUT Heroes, and they feature iconic players from a number of leagues and nations from around the world.

While not tied to an individual club like most FUT items, FIFA 22 Heroes will provide strong chemistry in your FIFA 22 Ultimate Team to players from the same nation or the same league that they made their name in. A Hero’s league is decided based on an iconic moment from their careers, such as a memorable goal or involvement in a title-winning passage of play.

While FIFA 22 will still boast a huge line-up of Icons, FIFA 22 Heroes are a great middle ground between those super-expensive players and your standard special cards like Team of the Weeks or Man of the Matches. Their overall ratings appear to fall between 85 and 89, and unlike Icons, there is only one single version of each Hero player.

EA has revealed a line-up of 19 FUT Heroes for FIFA 22. Here we’ll go over all the confirmed FIFA 22 Hero cards, how they work in FIFA Ultimate Team, and their ratings, nationalities, and leagues.

Here’s everything we know about FIFA 22 Heroes in Ultimate Team.

What are FIFA 22 Heroes

In FIFA 22, Hero cards feature former pro players, just like Icon cards, but they will be slightly lower rated and there won’t be multiple versions of the same player.

Related: Who are the best FIFA 22 strikers?

These players are tied to a league (specific to a heroic moment from their career) as well as their nationality, but will not represent a club.

This means they will be extremely useful in both building squads to compete with and potentially SBCs, if they are affordable. 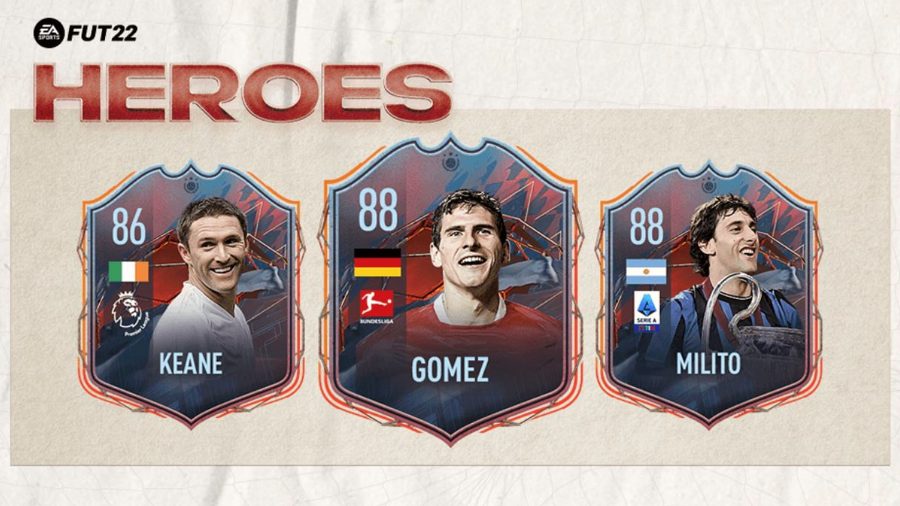 Here are all the FIFA 22 Heroes EA has confirmed so far, along with their rating, nationality, league, and potential position.

Here are all the FUT Heroes that have had their card stats revealed for FIFA 22 so far.

Happy to be back in @EASPORTSFIFA with my new card as a FUT HERO and for sure my heading rating and celebration is 9️⃣9️⃣ @premierleague pic.twitter.com/tfY3pQ0F6H

Abedi Pele has a monstrous FUT Hero card for FIFA 22, and we can certainly see this rapid CAM being utilised out wide as a winger in-game. Pele boasts 91 pace and 91 dribbling, as well as an impressive 87 passing and 83 shooting.

One of the highest-rated FUT Hero cards is David Ginola, and his card stats are through the roof. Aside from his defending, all of his stats are over 84 – including and impressive 88 shooting and 91 dribbling.

Expect Mostovoi to be an affordable but effective CAM for your La Liga squads in FIFA 22. While some of his stats look a bit average, he does boast 88 dribbling and 86 passing – two key stats for any player in his position.

Fernando Moreintes looks to be the most clinical finisher out of the entire FIFA 22 FUT Hero lineup. The Spaniard boasts 90 shooting, along with commendable dribbling, pace, and physical stats. A great poacher to have in the centre of a front three.

🦸‍♂️ The Heroes of @LaLigaEN get their ratings for #FIFA22, do they make your XI? 🤔#FIFARatings pic.twitter.com/4AgoO9fYhy

Colombian centre back Iván Córdoba could be one of the most feared defenders in FIFA 22. With 86 pace and 87 physical, he is one of the most athletic CBs out there, and with 90 defending, very little will be getting past him.

Similarly to Morientes, Diego Milito looks to be a clinical finisher. While most of his stats will be outdone by most of FIFA 22’s other top strikers, you can’t argue with 89 shooting for your goal-getter.

Di Natale is going to be one of the most desirable FUT Hero cards in FIFA 22 because of his insane stats. 90 pace, 90 dribbling, and 91 shooting makes him a not only clinical but tricky to defend against too. Pair him up with a bigger, more physical striker in a front two, and you’ll be laughing.

Because of his league and nation, we’ll sadly see very little of Campos in FIFA 22. And that’s a shame, because his stats are very interesting. With a whopping 84 speed, Campos is one of the fastest keepers we’ve ever seen in a FIFA game.

A decent set of card stats for attacking midfielder Lars Ricken. 85 shooting and 83 dribbling will make him a goal threat, but his 80 passing means he may not be the ideal playmaker in that CAM role.

With 90 shooting and 83 physical, Mario Gomez makes for a perfect target man and goal poacher. He won’t run rings around defences, but he will still get you goals.

Kohler is certainly one of the best options for a high-rated Bundesliga team. With 71 pace, there are certainly quicker centre backs out there, but you can’t argue with a defender that boasts 90 physical and 91 defending.

🦸‍♂️ It’s time to reveal the @Bundesliga_EN #FUTHeroes ratings in #FIFA22 – Do they make your XI? 🤔 pic.twitter.com/oMooHlnrCi

FUT Hero cards are not the same as Icons in FIFA 22 – Heroes are a completely separate card type. They offer different chemistry, have a different design, are generally lower-rated, and are tied to a specific league.

The same database leaks that produced the names above though did hint at some FIFA 22 new Icons, though, including Wayne Rooney and Cafu.

A new SBC has been added to FIFA 22, giving you the chance to nab an untradeable FUT Hero card. In order to earn the card, you’ll need to complete three SBCs, but they aren’t particularly difficult. These SBCs require an 83-rated squad, an 85-rated squad, and an 86-rated squad.

As you can see the FUT Hero Upgrade SBC isn’t particularly difficult to complete, but it is a risky one. Some hero cards, like Cahill, can be bought from the market for around 40,000 coins. This SBC will cost you around 180,000 coins if you don’t have the fodder – and the risk might not pay off.

Still, if you’re adamant you want to complete it, make sure to check out our cheapest high-rated FIFA 22 players guide.

That’s everything we’ve got on FIFA 22 Heroes for now, but if we get more information soon we’ll update this guide.