Over the past few games, Squad Building Challenges have played an increasingly important role in FIFA Ultimate Team. SBCs give players a chance to make some early coins or to trade in their club’s dead wood for a shot at high-rated special cards or Icons.

At the start of FIFA 21, there’s plenty of SBC content to work your way through – but some of them are a real test of your squad building skills. In the Hybrid Nations SBC set, the final Around the World puzzle can cause quite a few headaches. While this final challenge is significantly easier than the Puzzle Master SBC in the League and Nations set or the First XI SBC in the Hybrid Leagues set, it can still catch people out as it requires ten different nationalities and an 81 squad rating.

But don’t worry, we’re on hand to help you through it so you can complete the set and land yourself a lovely Rare Mega Pack. If you’re also looking a bit thin on the ground for players in your club, we also have a solution that requires no position changes or loyalty, meaning you can very quickly (and cheaply) grab players from the Transfer Market to get it done in a jiffy.

Compared to the similar Hybrid Leagues and League and Nation Hybrid sets, this group of puzzles is probably the easiest. The general trend here is to pick one league and stick to it, but make sure you have a few players from some obscure nations to tick the boxes.

The best leagues for the Hybrid Nations SBC set are:

FIFA 21 Around the World SBC solutions

So for the final challenge in the Hybrid Leagues set, you’re going to need players that are relatively high-rated, from a variety of nations, and some that are in some rather awkward positions.

While a number of leagues, such as Ligue 1 or Bundesliga, can be used to solve this puzzle with the help of loyalty bonuses or Position Change items, we’ve found a relatively cheap solution that can be bought straight from the Transfer Market. No need to use consumables, and no need to worry about loyalty.

To do this, you have to use Premier League players, as it’s the only league with suitable options for the LWB and RWB positions.

Here’s our FIFA 21 Around the World SBC solution: 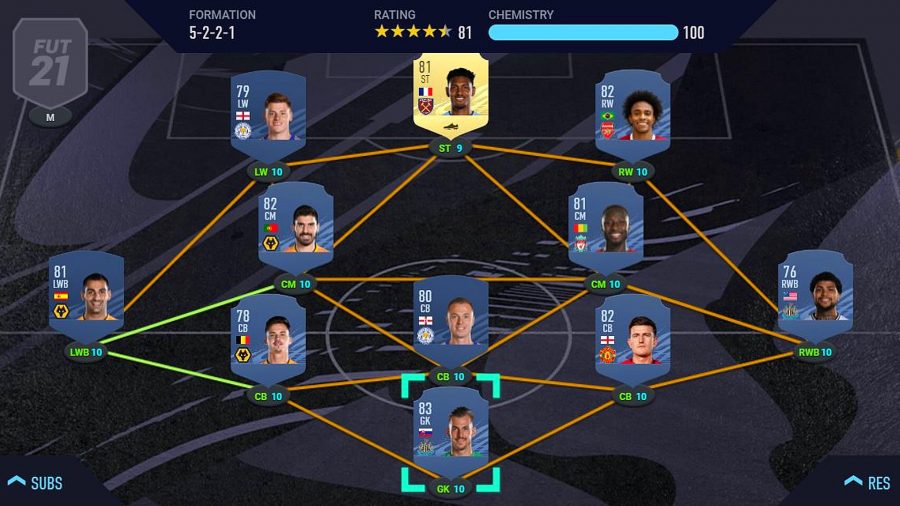 The chemistry shown above is inflated as concept squads automatically award loyalty, but trust us that this works without it. Thanks to a double club link, Jonny will be boosted to 10 chemistry despite not having a loyalty bonus. This no loyalty, no position change team should cost less than 20,000 coins.

While this is by no means the only way to complete this SBC, it is one of the quickest if your club is looking a little empty when it comes to players with loyalty bonuses.

Hopefully this guide will show you the methodology behind cracking this challenge, and may the pack gods shine brightly upon your rewards.