Squad Building Challenges can be vital for FIFA 21 players who aren’t willing to splash the cash on FIFA points to get ahead in Ultimate Team. In the early game, they provide players the chance to earn packs which could result in a high-rated, high-value player.

At the beginning of each FIFA game, there is a staple set of SBCs for players to complete which teach you the inner workings of the game’s chemistry system and gives you the chance to earn some coins and packs as you progress. But some of them are notoriously difficult, and in the Hybrid Leagues SBC set, the First XI challenge is the most formidable of them all.

This tricky puzzle can get pretty expensive to solve if you haven’t got some of the players needed in your club, plus you’ll need to have packed or completed ten games with at least a few of the players needed to get a chemistry bonus from loyalty. But don’t worry, we’ve got a few workarounds that will see you complete the Hybrid League set without breaking the bank.

The Hybrid Leagues SBCs in FIFA 21 are all quite similar but vary in difficulty. The general method for solving them is to use players of the same nationality but who play in different leagues to get the desired amount of chemistry.

The first three in the set – Give Me Five, Seven-League Boots, and The Whole Nine Yards – aren’t massively difficult to solve but do have minimum squad ratings to look out for. Whole Nine Yards, especially, can catch people out because of its 80 squad rating requirement, so make sure you save a few high-rated players if you pack them to help complete this one.

As explained above, using players of the same nationality is the most reliable method to complete these Hybrid Leagues SBCs. While some nations have an abundance of players in Ultimate Team, they may not be dispersed across many leagues, making them a poor choice. England is a prime example of this, as the majority of players play in the Premier League with very few in other leagues from around the world.

There are only three nations you can use to solve the feared First XI puzzle – more on those a little later. But for the others, there’s several nations that will help to solve them due to their players hailing from multiple unique leagues.

The First XI SBC is a daunting one. It requires you to make a 100 chemistry team using 11 players, eight of which are rare, all from different leagues. The only affordable way to solve it is using players from one of three nations, who have enough rare players in different leagues to tick off all the requirements.

For the First XI SBC, you will need players from either Argentina, Brazil, or France. However, it can be done by using players from nations like Portugal by putting some players out of position, but this will require most players having a loyalty bonus (either packed or played in ten games).

It’s also worth noting that if you have already packed some Position Change consumables, you may be able to pick up cheaper players in different positions and change them into the one you need. For example, a CAM of the same league and nation may be a cheaper option than the CM you need, so picking them up and using your consumable on them will save you some coins.

Packed players also have that extra chemistry due to their loyalty bonus, so a packed LW will have as much chemistry as a LM you buy from the transfer market, for example.

Depending on which console you’re on, the prices for the players needed can fluctuate massively, so it’s always advisable to check player prices on sites such as FUTWIZ before heading into one of these solutions.

At the time of writing the cheapest First XI solution – which requires no position changes and just one player with a loyalty bonus – is this French team. 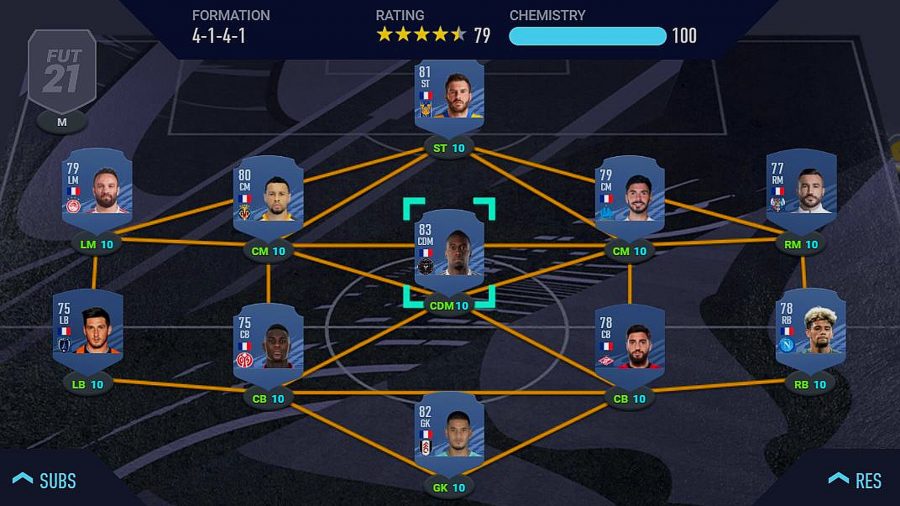 You could also solve this using Nkoudou (TUR 1) instead of Valbuena and Gomis (SAU 1) instead of Gignac, if current prices make them cheaper.

At the time of writing, the French solution should be doable for less than 23,000 coins.

If you have some Argentinians in your club, this First XI solution could also work. 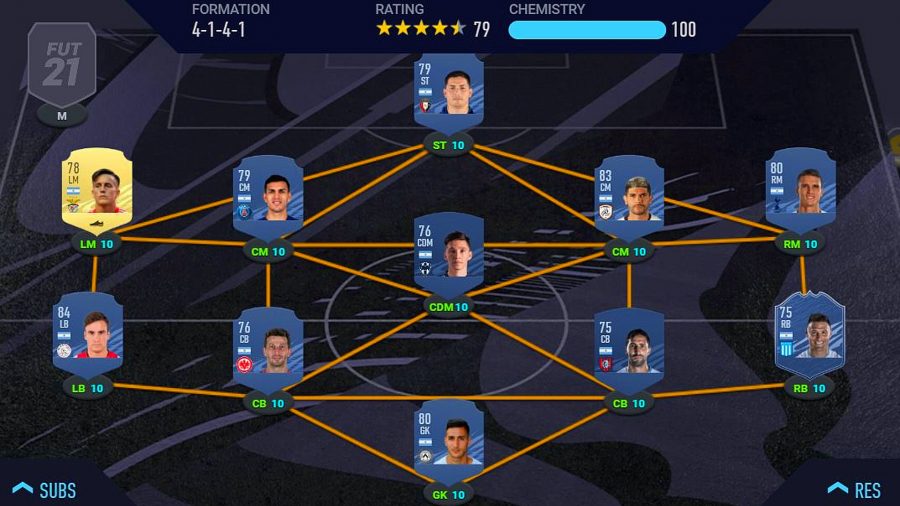 At the time of writing, this Argentinian solution is slightly more expensive, but worth it if you already have a few of those players in your club. It should cost around 26,000 coins.

There are also plenty of Brazilian solutions, but many of the key players needed for these methods have extremely high prices at the moment.

Remember – and this is your final warning – you will need loyalty on at least one of the players you use. This means either playing ten matches with that player or pulling it from a pack.

So there’s our run down of the Hybrid Leagues SBC set and the infamous First XI puzzle. May the pack gods be shining down upon your rewards.