The most annoying bosses in FromSoftware games are the ones that just don’t stop ever attacking. And, continuing that tradition in Elden Ring is the head-bangingly annoying Mad Pumpkin Head. Like us, you are probably tired of dodging this guy’s head slams, which is why you probably wound up here: an Elden Ring guide on how to beat Mad Pumpkin Head.

Luckily, we have killed the relentless attacker and come up with a strategy for taking him on and eventually slaying him for good. It is definitely worth killing this boss as behind him is one of the many NPC locations in Elden Ring, with Sellem the Sorcerer in a locked room connected to the boss arena.

This guide will show you how to beat Mad Pumpkin Head in Elden Ring and hopefully walk out with some shiny new Sorceries to enhance your arsenal as you traverse The Lands Between.

If you can, try and use a Straight Sword or Curved Sword when taking on Mad Pumpkin Head as he is particularly weak to slashing damage.

The majority of Mad Pumpkin Head’s attacks consist of him slashing with his flail. These combos with the flail can be anywhere from one to around half a dozen slashes.

As such, you don’t want to try and land hits in-between each slash. Instead, you should dodge, and dodge, and dodge some more. The attacks can be avoided by dodging into him and to his side, which will give you a window of opportunity when he finally finishes attacking. 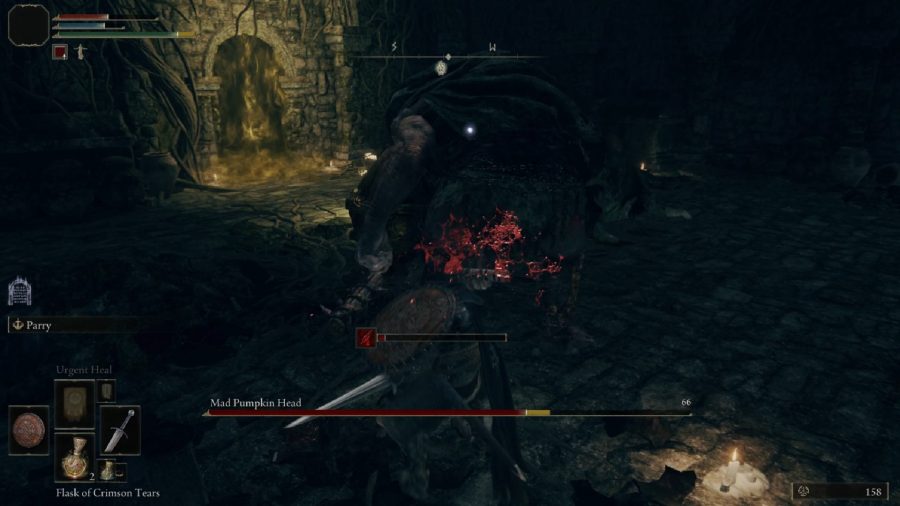 Make sure he has finished attacking completely before trying to land some hits of your own. Occasionally it can look like he is done, but he will actually just attack with a bit of a delay. This is mostly telegraphed by an overhead slam rather than slash. This should put you round its back, allowing you to land two or three hits.

A great attack to do this on is his uppercut, which he will follow up with a slam and a long recovery.

Finally, Mad Pumpkin Head can slam his giant metal head into the ground. There is a chance you might get caught in this attack, but it can be dodged by rolling to your right and into Pumpkin Head, so you end up by his side. You are then able to land a few hits.

That about covers all our tips for how to beat Mad Pumpkin Head in Elden Ring. In summary, he is relentless and you want to bide your time and attack when he is recovering. For more boss guides, among other tips, check out our Elden Ring walkthrough, which is packed with helpful information.