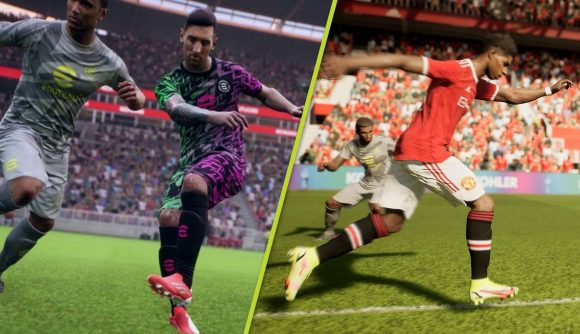 Konami’s revamp of the Pro Evolution Soccer series, now known as eFootball, got off to the worst possible start when, last autumn, it was first rolled out in a horrendous, buggy state. The game was in such poor shape that Konami soon delayed the full launch of eFootball from November 2021 to spring this year. Now, the time has come.

In a tweet today, Konami confirms that eFootball’s 1.0.0. update – which includes all of the content billed for that initial November update – will roll out next week on April 14. It is worth noting that the mobile version of eFootball, which was intended to have full cross-play with the console and PC versions of the game, will not be getting the 1.0.0. update next week, and that update will remain delayed.

In a blog post, Konami reflects on the rushed release of eFootball last year. “We were too focused on getting the game out on time that we lost sight of the most important thing – quality. Naturally, we were met with critical reviews from rightfully disappointed fans.”

Konami also outlines some of the improvements and changes it has made. While it has of course been busy squashing the enormous amount of bugs and performance issues eFootball had, it has also made some gameplay changes too for a better experience on the pitch.

This includes reworks and new mechanics for defending, passing, shooting, and dribbling. The in-game tactics system, Game Plan, has also received a revamp.

Driven by feedback received from our users, we have worked on fixing bugs, adjusting the game balance, and adding new elements to the game to make it even more enjoyable for our users.

The Creative Team mode in eFootball will also be rebranded as Dream Team when the update rolls out next week, and that’s had some unspecified tweaks as well.

It will be interesting to see how effective these extra few months of development have been and if eFootball is now in a position to at least challenge the juggernaut that is FIFA 22. It will also have more rivals in the coming months and years to contend with, as UFL looks to debut its football sim later this year. While in early development, GOALS also released details on its gameplay, blockchain marketpalce, and esports ambitions earlier this week.