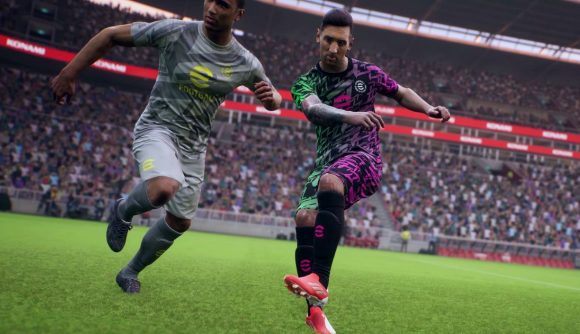 eFootball’s rocky launch has just got a little bit rockier, as Konami has announced that the game’s major content update in November will be delayed until spring 2022. The 1.0.0. update was set to take eFootball out of its initial demo-style phase and add full crossplay between console and PC, new modes, and more, but this will now be pushed back until next year.

In a statement, Konami says that despite “working diligently” to get eFootball’s first big update ready, “more time is needed to deliver the product in the quality that will meet the expectations of our users.”

On top of this, Konami has cancelled and refunded all preorders for its eFootball 2022 Premium Players edition, which would give those who purchased it a head start once the 1.0.0. update rolled out by offering chance deals to sign top players. Despite the very concept of the Premium Players pre-order facing criticism when it was announced, Konami says it will now be “considering” reintroducing this premium edition closer to eFootball 1.0.0.’s new release date.

Because orders for this edition of the game are now cancelled, those who purchased it will have to redownload the base version of eFootball if they want to play the game in its current state.

It is safe to say that Konami’s attempts to improve gameplay on a new engine, coupled with its troubled, gradual rollout of its new free-to-play model, have led to a shambolic launch for eFootball.

An important update from the development team.

In its initial roadmap for the game, Konami was anticipating to have launched full crossplay between consoles, PC, and mobile devices, battle passes, multiple modes, and competitive esports tournaments all by the winter.

The delay to update 1.0.0., which was only the second stage of that three-stage roadmap, shows that maybe Konami bit off more than it could chew with its ambitious rebrand of the PES series. To have any chance of success now, eFootball must be an incredibly polished experience when it does receive that major update next year.