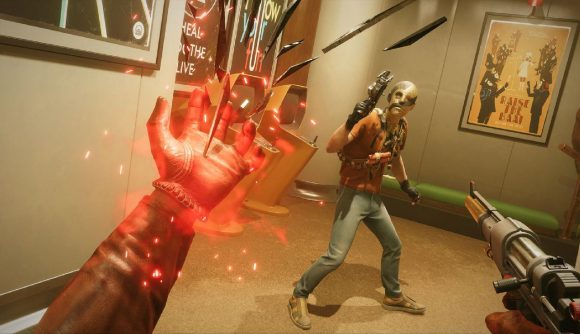 With unanimous praise from critics, Deathloop has had a pretty successful launch. The game has earned stunning review scores from outlets, including our very own review in which we awarded the game a near-perfect nine out of ten. But, the game is caught in a catch 22. Arkane is now owned by Microsoft thanks to the company’s Bethesda acquisition last year, which means the french developer is technically releasing a Microsoft first-party game on Sony’s new console.

Pair that with the fact that Sony and Bethesda previously signed a timed-exclusivity agreement for a year, and Deathloop won’t be on Game Pass or Xbox consoles until September 2022 at the earliest. This situation has caused some console loyalists to take to the internet to vent their (ridiculous) frustrations, with Sony fans tanking the game’s user score on Metacritic as they claim they don’t want to buy a game that supports Microsoft.

One user, ‘sadienookan’, writes: “we won’t support a game from Xbox Game Studios. Don’t give them money”. Another user by the name of ‘RolandOG’ says: “Graphics are terrible. Plays terribly. Maybe this is to make Xbox look better, being Bethesda was bought by Microsoft and they have much better-looking games coming?”

However, it’s not just the Sony tribe – Microsoft fans are also getting in on the review-bombing, with one user, called ‘XP3Chief4evr’ (the name says it all), stating that the greatest company on Earth is Xbox and Phil Spencer is the greatest man on Earth. They even whip out the Sony ponies line, which feels more outdated than the PS3 these days.

This hasn’t obliterated the user score on Metacritic completely, but it has brought the score down to a significantly lower 5.5, compared to the 89 critic score. In total, there are 136 negative, 19 mixed, and 160 positive reviews on Metacritic, when it comes to that user score.

Xbox & PlayStation fanbitches are out in full force in the Deathloop metacritic, firebombing its user review score 😂

Despite the review bombing – the buzz for the game on social media and Twitch seems to be high as players are discovering new secrets on the island of Blackreef. Even though this is one of the first times we can think of where both PlayStation and Xbox loyalists tanking the review score of a game, it ultimately won’t make a dent in Deahtloop’s glowing reputation.