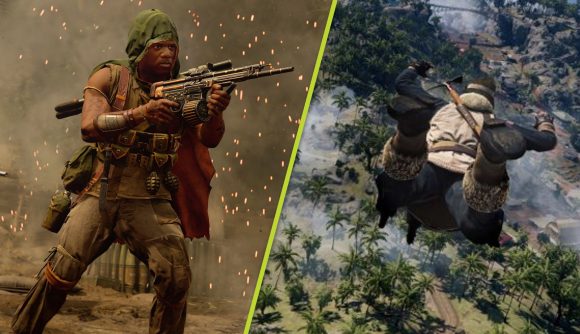 Yesterday’s Call of Duty Warzone update was a big one, as Raven Software looked to balance over 20 of the battle royale’s assault rifles and SMGs. With so many changes, a meta shift is currently underway, and early weapon stat testing appears to show that there is a new top dog if you’re looking for a long-range AR in Warzone Season 3 – the STG44.

At the start of the Vanguard-era, you were almost guaranteed to bump into at least one player with an STG44 Warzone loadout every game. However, the gun steadily dropped in popularity, with the likes of the Automaton or the Bren becoming meta picks if you wanted a long-range beamer. Now though, it seems to be back.

Warzone weapon tester ‘TrueGameData’ has compiled all the new damage values and time to kill stats following yesterday’s update, and thanks to some generous damage output buffs, the STG44 now looks to be leading the way in long-range gunfights.

From ranges of around 45 metres and over, the STG44 boasts a TTK that is quicker than all of its main rivals, such as the XM4 and the C58.

Even with the desirable Gorenko 50 Round Mags attachment – which was ever so slightly nerfed in yesterday’s update – the STG44 can still outperform most weapons at range.

With so many people having the STG44 fully levelled as well – thanks mainly to it being the first AR you can use in Vanguard and it being prominent in Season 1 – expect to see a big STG44 resurgence this season.

With last week’s massive overhaul to snipers and this week’s massive balancing update for ARs and SMGs, Warzone Season 3 is shaping up to be one of the most significant for the Warzone meta in a very long time.