Two exciting new Call of Duty: Vanguard weapons – the STG 44 and the M1 Garand – have been officially added to Call of Duty: Warzone as earnable rewards in the Season 6 Battle Pass

The most interesting is the M1 Garand tactical rifle, which appears to have a savage rate of fire and lethal accuracy. Sadly, as is also the case with the STG 44, you can’t yet customise your M1 Garand with your own combination of attachments. However, the Battle Pass gives you two powerful blueprints to use instead.

While Warzone blueprints often look the part, there’s never really an in-game benefit to using them. That’s not the case with the M1 Garand, though, as both blueprints have eight attachments bolted on to them. Eight! With all of those stat boosts, you can bet your house on this making its way into our best Warzone loadout real soon.

But how do you unlock the M1 Garand and its lethal blueprints in Warzone? We’ve got you covered.

To unlock and use the M1 Garand in Warzone Season 6, you must reach certain tiers of the Season 6 Battle Pass to unlock two different blueprint variants.

The M1 Garand’s two blueprints in Warzone feature different combinations of attachments. Here’s a rundown of each one. 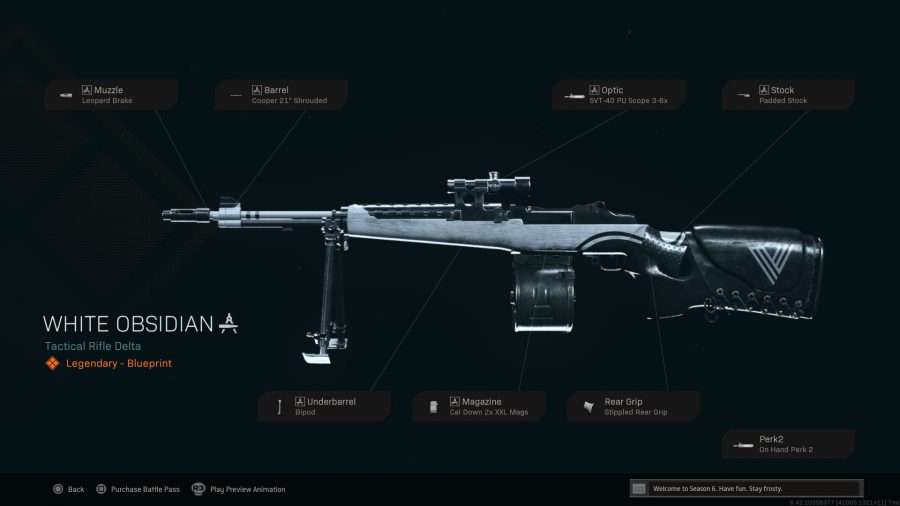 At Tier 34 of the Season 6 Battle Pass, you’ll unlock the White Obsidian M1 Garand blueprint. The eight attachments on this blueprint are fit for a long-range marksman. It features a bipod, an “XXL” magazine, and a 3-6x variable zoom scope. It also has a new weapon perk called On Hand. 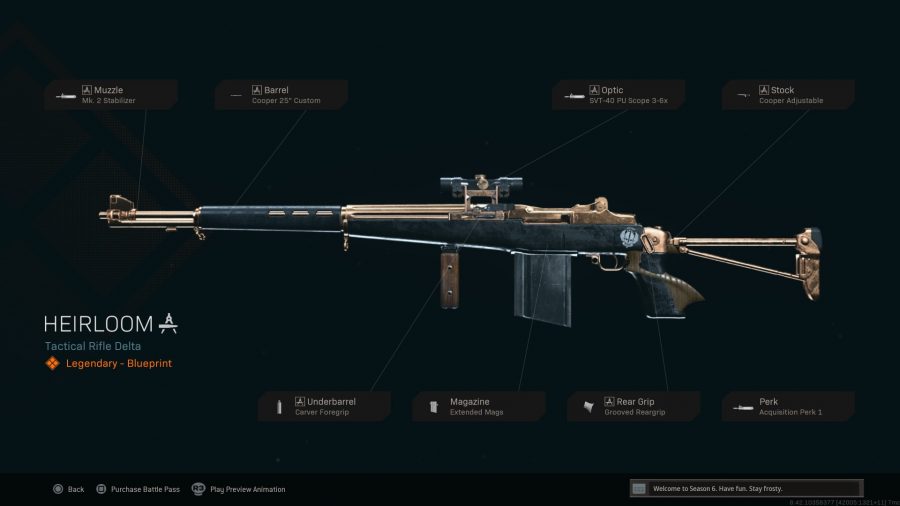 At Tier 72 of the Warzone Season 6 Battle Pass is the Heirloom M1 Garand blueprint. This is also a long-range specialist, with many similar attachments to the White Obsidian. However, it has an intriguing weapon perk called Acquisition, which gives boosted accuracy after a long-range kill.

So that’s how you unlock the two M1 Garand blueprints in Warzone Season 6. With long range snipers like the Swiss K31 dominating the Warzone meta at the moment, expect some of Verdansk’s finest sharpshooters to enjoy these two blueprints.