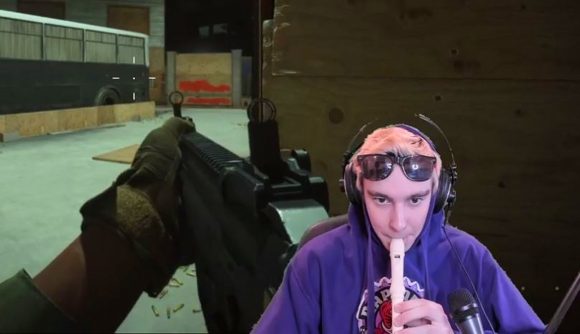 A Call of Duty streamer, who went viral after hitting incredible sniper shots while using a drum kit as a controller in Modern Warfare, is back at it again. The latest weapon in his musical arsenal? A humble recorder flute.

Most people in the Call of Duty community have now seen the clip of ‘DeanoBeano’, a member of SoaR Gaming, sniping enemy players with a drum kit. Now after weeks of practice the player has finally won his first Gulag in Warzone using his latest instrument. Looking to get back into the fight with a 1v1 victory, DeanoBeano pulls out his trusty recorder which will move him forwards, left, and right, plus aim and shoot, depending on the note he plays.

While the gameplay itself will never make it into a Warzone montage, DeanoBeano carefully edges into the middle lane of the new Verdansk Gulag, Kilo in hand, and blows several sharp notes, landing precise shots on his opponent. Admittedly, the chap he’s against looks to be standing virtually in the same spot he would’ve spawned at, but lining up the shot with a woodwind instrument is no mean feat.

The streamer may have now ticked off the new Gulag from his achievement list, but his prowess with the recorder on Black Ops Cold War’s multiplayer has already been witnessed by plenty, with a montage of recorder snipes being watched over a million times on TikTok.

With DeanoBeano mastering both the drums and the recorder in Call of Duty, and with past clips also showing him using a piano and bongo drums, we wonder which instrument he will pick to humiliate his opponents with next.

And no, we’re not adding a recorder to our list of the best Warzone guns, before you ask.