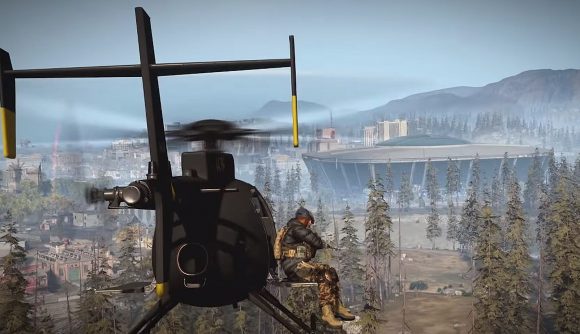 A third short teaser video for Call of Duty: Modern Warfare Season 5 has been revealed by another Warzone creator, and this one looks to debunk theories of a completely devastating nuclear attack on Verdansk but does show the aftermath of an explosion at Stadium.

YouTuber Jack ‘Jackfrags’ Mason was the recipient of the next Season 5 teaser. The USB drive containing the short clip was delivered to him in the same fashion as the first two that were sent to Nick ‘NICKMERCS’ Kolcheff and Tyler ‘TeePee’ Polchow – inside of a rook chess piece.

This third clip is certainly not as clear as the first two visually, as the action takes place in the background and the camera is cracked. However, the footage is shot from inside of some kind of tunnel, and shows a helicopter landing among some fiery, smoky wreckage. The time stamp on the video also shows it to be taking place at 11:06, which is one minute after TeePee’s teaser that shows an explosion going off inside of Stadium. It’s also assumed that the helicopter is the one shown flying over Train Station in NICKMERCS’ clip.

The footage from Jackfrag’s teaser is widely assumed to be showing a helicopter landing inside of Stadium on the pitch next to where some form of bomb or missile has just detonated. This paves the way for the opening up of Stadium for players to access in Season 5. This also hints that the roof is either opened or has been blown off in the blast so that the helicopter can fly in.

Thanks to YouTuber ‘Inkslasher’ parts of the mysterious codes in the three clips have also been solved.

The middle section refers to the specific location of the cameras capturing the footage, with clip two’s ‘CONCRSE’ referring to the concourse of Stadium, and clip three’s ‘TUN’ referring to the tunnel (likely the one players will walk out onto the pitch from). The last two digits seem to refer to something else, but we’re not sure what those are just yet.

The perpetrators of the attack and those flying the helicopter are now thought to be Shadow Company, the mercenary group from Modern Warfare 2’s storyline which has a rook as its logo.

With map changes being hinted at in these teasers, Season 5 could look to be the most groundbreaking yet for Call of Duty: Warzone. Keep your eyes peeled on more Warzone streamers and YouTubers for another potential teaser.