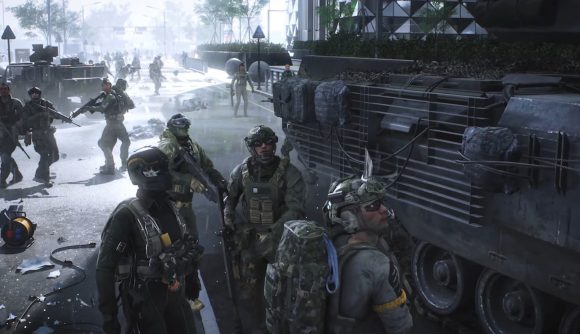 Battlefield veterans will have to wait a little bit longer to get their hands on Battlefield 2042, but for good reason. EA has announced it’s pushing back the technical playtest to later this summer so that thousands of players can help the team test Battlefield 2042 cross-play functionality.

In a recent blog Daniel Berlin, senior design director, says the team is still looking to “build and test” cross-play for the first-person shooter between PC, Xbox Series X|S, and PlayStation 5. Cross-play between old-gen consoles, Xbox One and PS4, will also be on the cards.

This means full cross-play, between PC and both generations of consoles, will not be available. This is likely due to limitations put on Xbox One and PS4 users and the fact they do not have access to 128-player matches. But it’s not all bad news – you’ll be able to carry that progress over should you decide to upgrade.

However, with that said, don’t expect to get an invite to the playtest. It’s a closed environment under strict NDA. EA is approaching people directly with invitations, but you can try your luck by registering for an EA Playtesting profile here.

If the cross-play news has got you excited ahead of the Battlefield 2042 release date, make sure you preorder the game here.