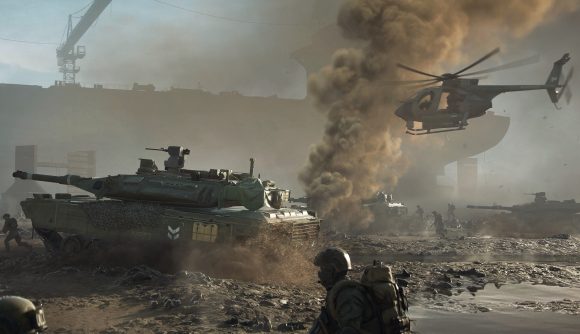 We’ve had a good look at All-Out Warfare, and have been teased with some basic information about Hazard Zone, but Battlefield 2042’s redacted third mode has remained something of a mystery.

All that we knew about the mode was that it was being developed by DICE LA (now Ripple Effect Studios) and that it was “quite special.” That’s it. However, during today’s Future of FPS livestream from EA, we have been given a first inclination of what the mystery mode might be all about.

Christian Grass, general manager of Ripple Effect, confirms that the mode will involve some iconic maps from previous games. “I can’t say too much about it, but what I can say is that one of the components of this experience that we’re creating is that we’re adding some of the fan-favourite maps back into Battlefield 2042,” he says.

Sadly, that’s all that Grass was able to reveal, but it does confirm previous reports from insider Tom Henderson that something known as the Battlefield Hub was being lined up for 2042, which features – you guessed it – remastered maps from old Battlefield games.

Following Grass’ reveal, Henderson also posts on Twitter a list of six maps his sources have said could feature in the redacted mode.

The maps I’ve heard will be coming to the #BATTLEHUB:

We don’t have too long to wait for more official information on the redacted mode, as more will be revealed during EA Play Live on July 22.

In the meantime, check out everything we know so far about Battlefield 2042 Hazard Zone. And no, it’s not a battle royale…